Prabhas and Deepika Padukone’s Next to Release in English: Reports

Apart from this, Prabhas will be wrapping up the shoot of Salaar and Adipurush. Both the films will release in 2022. Director Nag’s film with Prabhas and Deepika is targeted for a release in the first half of 2023. 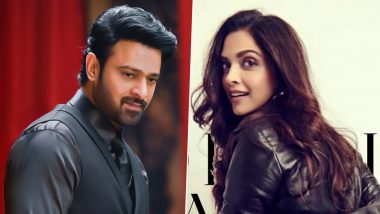 Prabhas and Deepika Padukone's untitled film is one of the biggest films in the pipeline. While the makers have not shared much details about the project, buzz is that the film will go on the floors in the month of July and the actors are currently prepping for their roles in the film. It was also being reported that the is an apocalyptic film, set in the futuristic timeline. The story will revolve around the characters fighting for survival. Another update about the film that has now surfaced online suggests that the film will release in English language too. Prabhas 21: Fans Say Deepika Padukone and Prabhas’ Chemistry in Nag Ashwin’s Next Will Set the Screen on Fire.

A source close to the development told Pinkvilla, “Nag Ashwin and the entire team of this science-fiction tale are planning to release the film in not just the five Indian languages- Telugu, Hindi, Tamil, Malayalam and Kannada – but also in English, giving it the platform to perform and grab eyeballs across the globe. The idea is to make the biggest pan-world film in India." The source added that the decision of bringing the film in English was made because the premise of the film has a global appeal.

“If Hollywood can dub their films in Hindi, Tamil and Telugu, why can’t we? It’s an attempt to try something new and unique. There are conversations going on at multiple levels, on all aspects, and if all goes as planned, a release in English is on the card for the yet-untitled film,” the source added. Earlier, the popular production house of Tollywood, Vyjayanthi Movies, had made the official announcement that Amitabh Bachchan will also be coming on board for Prabhas 21. Prabhas 21: Amitabh Bachchan Joins Prabhas And Deepika Padukone’s Film!

Apart from this, Prabhas will be wrapping up the shoot of Salaar and Adipurush. Both the films will release in 2022. Director Nag’s film with Prabhas and Deepika is targeted for a release in the first half of 2023. As for Deepika,  she is currently busy shooting for the action thriller, Pathan, which features her alongside Shah Rukh Khan and John Abraham.

(The above story first appeared on LatestLY on Mar 24, 2021 10:32 PM IST. For more news and updates on politics, world, sports, entertainment and lifestyle, log on to our website latestly.com).