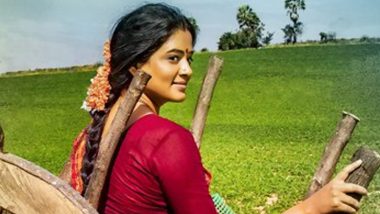 South actress Priyamani turned 36 today. The National-award winner star's fans got treated on her birthday with two filmy surprised. Her first look from Viraata Parvam was unveiled by the Premam actress, Sai Pallavi. Her look as 'Bharathakka' indeed looked interesting. Now, the makers of Narappa too went ahead and revealed her first look in the film, as 'Sundaramma.' She looks beautiful as a village belle in this first glimpse. Priyamani’s First Look from Viraata Parvam Unveiled on Her Birthday! Sai Pallavi Shares a Lovely Post for ‘Bharathakka’.

In the new pic, we can see her in a checkered red saree and a string of flowers attached to her long braid. With a huge bindi and a warm smile, Priyamani's 'Sundaramma' is like a delightful treat to her fans! For the uninitiated, Narappa is the Telugu remake of Dhanush starrer Asuran. This Tamil flick had Manju Warrier as the female lead which Priyamani will play in the Tollywood film. Check out the look below.

Earlier, she had revealed about Viraata Parvam in an interview where she had said, "It’s going to be a different kind of film altogether. The only thing I can share at the moment is that it’s a true story." She did not reveal much about how she is seeing her role of Narappa but confirmed doing it saying, "I’m working with Rana’s uncle too in Narappa, apart from two Telugu shows." Well, now that the cat is out of the bag, how did you like Priyamani's looks in both the films?

(The above story first appeared on LatestLY on Jun 04, 2020 05:06 PM IST. For more news and updates on politics, world, sports, entertainment and lifestyle, log on to our website latestly.com).