The upcoming Telugu action thriller, Pushpa, features Allu Arjun in the lead role. The film produced under the banner of Mythri Movie Makers was scheduled to be released during the time of Diwali this year. 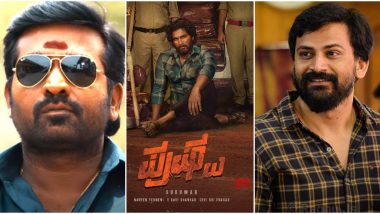 The upcoming Telugu action thriller, Pushpa, features Allu Arjun in the lead role. On the occasion of the lead actor’s birthday, April 8, the makers had released the first look and one couldn’t get over the intense, rugged look of Allu Arjun. Fans were curious to know more details about the film’s cast. It was then revealed that Rashmika Mandanna would be sharing screen space with the Tollywood hero in this movie. Then rumours were rife that the makers have roped in Vijay Sethupathi to play the antagonist in Pushpa. And now, according to leading media reports, Vijay Sethupathi has opted out of the project due to date issues. Pushpa: Makers Of Allu Arjun Starrer To Spend Rs 6 Crore On A Six-Minute Chase Sequence?

As per report in TOI, Vijay Sethupathi confirmed in an interview that he has opted out of Pushpa. The superstar revealed that he met the film’s director Sukumar and explained him his call sheet issues. Sethupathi, who met the director in person, also clarified that he did not want any sort of confusion in the future and any clashes with dates due to other projects, hence he decided to opt out of Pushpa. According to a report in The Hans India, Kannada actor Dhananjaya has replaced Sethupathi and would now be seen playing the role of the baddie in this film. Dhananjaya had made his feature film debut in 2013 with Director’s Special, but it is his performance in Tagaru that shot him to fame. However, the makers are yet to make an official announcement on Dhananjaya being roped in for Pushpa. Allu Arjun to Take a Pay Cut for Pushpa?

Pushpa also features Prakash Raj, Jagapathi Babu, Vennela Kishore and Anish Kuruvilla in key roles. The film produced under the banner of Mythri Movie Makers was scheduled to be released during the time of Diwali this year. However, the filming has been delayed owing to the ongoing global crisis and hence the release date will be postponed.

(The above story first appeared on LatestLY on Jul 14, 2020 01:53 PM IST. For more news and updates on politics, world, sports, entertainment and lifestyle, log on to our website latestly.com).