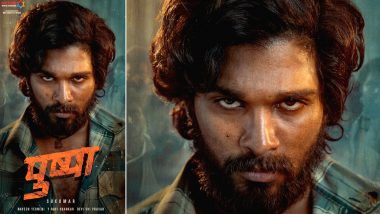 The upcoming action-thriller Pushpa features Allu Arjun in the lead role. Directed by Sukumar, the actor’s first look as Pushpa Raj was unveiled on April 8, which was also the lead hero’s birthday. His intense avatar in this rustic actioner did leave fans impressed. However, the film had to be put on hold owing to the coronavirus outbreak. Now the latest reports on Pushpa suggests that the budget is going to get exceeded due to a high-octane action sequence. Pushpa First Look: Allu Arjun Dons a Fierce Avatar in Sukumar's Upcoming Actioner, Leaves Fans Impressed With This Special Treat on His Birthday (View Pic).

Reports are rife that the makers are going to shoot a six-minute chase sequence in India itself. It was initially decided to be shot in abroad but now the makers have decided to make it as a ‘Make in India’ project. This chase sequence is said to be of a whopping Rs 6 crore and it would be choreographed by National Award-winning stunt choreographer Peter Hein, reports Telugu daily Sakshi. The report also mentions that there would be some other international stuntmen as well. Well, looks like this going to be a mind-boggling chase sequence. Pushpa: Suniel Shetty to Play the Role of a Villain in Allu Arjun Starrer?

Besides Telugu, Pushpa will simultaneously be released in four other languages - Malayalam, Tamil, Kannada and Hindi. Produced under the banner of Mythri Movie Makers, the film also features Vijay Sethupathi as the antagonist whereas Rashmika Mandanna will be seen as the lead actress. The makers had planned to release this film during the time of Diwali this year. But there could be changes in it owing to the ongoing crisis.

(The above story first appeared on LatestLY on May 13, 2020 01:11 PM IST. For more news and updates on politics, world, sports, entertainment and lifestyle, log on to our website latestly.com).