Rajinikanth Birthday: From Baashha To 2.0, 5 Commercially Successful Films Of Thalaivar That Fans Would Love To Watch Again!

Rajinikanth has been entertaining the audience for more than four decades and one just cannot thank him enough. For the variety of roles that has taken up in his acting career, he has indeed set a remarkable benchmark. 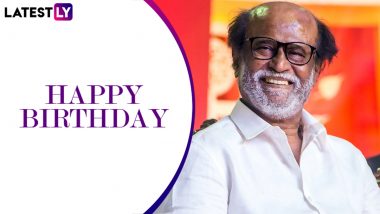 Happiest birthday to the superstar of the nation, Rajinikanth aka Thalaivar. He has been entertaining the audience for more than four decades and one just cannot thank him enough. For the variety of roles that has taken up in his acting career, he has indeed set a remarkable benchmark. Be it romance, comedy or action or any other genre he has starred in, Thalaivar has aced it in every role. Today, Thalaivar celebrates his 71st birthday and fans have already started with the celebrations. This year it is even more special as the legend was honoured with the Dadasaheb Phalke Award at the 67th National Film Awards. Annaatthe Box Office Collection: Rajinikanth’s Film Surpasses Rs 100 Crore Globally in Just 2 Days.

Rajinikanth is one of the biggest movie stars of Indian Cinema, who continues to hold a ‘matinée idol’ status. It was in 1975 when he had made his cinematic debut with the film Apoorva Raagangal in which he had a minor role. He bagged his first major role with the Telugu flick Anthuleni Katha in 1976 and in the same year he got his breakthrough in Tamil Cinema with the film Moondru Mudichu. The legend has delivered numerous blockbusters over the years. On the occasion of his birthday, let’s take a look at his commercially successful films that fans would love to watch all over again.

Baashha – Rajinikanth was seen as a crime boss in this film helmed by Suresh Krissna. This film ran in theatres for almost 15 months and it is one of those movies in his career that earned him a ‘god-like’ status in his state. In 2001 the film was remade in Kannada as Kotigobba.

Sivaji – Shankar’s film is another major hit movie in Thalaivar’s career. He played the role of Sivaji Arumugam, a rich Indian software architect, who aims to get rid of the corrupt system in the country and serve the poor.

Enthiran – Rajinikanth was seen in dual roles, a scientist and an andro-humanoid robot. It not just emerged as the highest-grossing Indian film of 2010, but also won two National Film Awards.

Kabali – This Pa Ranjith movie featured Rajnikanth as a Malaysian Tamil crime boss. Fans were thrilled to watch the superstar as an aged gangster.

2.0 – It is the standalone sequel to the 2010 film Enthiran in which Thalaivar reprised his roles of Vaseegaran and Chitti as the Robot. This blockbuster movie happens to be the the sixth highest-grossing Indian film worldwide.

These are some of the films of Rajinikanth that fans would love to watch all over again. Here’s wishing the superstar a very happy birthday and a fantastic year ahead!

(The above story first appeared on LatestLY on Dec 12, 2021 12:01 AM IST. For more news and updates on politics, world, sports, entertainment and lifestyle, log on to our website latestly.com).