Rashmika Mandanna to Be Paired Opposite Vijay in Thalapathy 65?

Thalapathy Vijay would be turning a year older on June 22. Fans are hoping that the makers of Thalapathy 65 would announce about the complete cast and other key details of this upcoming flick. 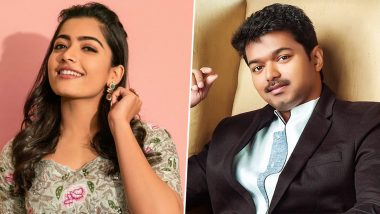 Thalapathy Vijay would be turning a year older on June 22. Yes, it is 46th birthday and all his fans are hoping that the makers of Thalapathy 65 would announce about the complete cast and other key details of this upcoming flick. There have been numerous names doing rounds about the lead actress of Thalapathy 65 and latest name to have joined the bandwagon is of Rashmika Mandanna. As per reports, Rashmika might be paired opposite Thalapathy Vijay in this upcoming project. Kajal Aggarwal and Pooja Hegde Roped In for Vijay Starrer Thalapathy 65?

Before Rashmika Mandanna, the other names that were doing rounds were Kajal Aggarwal and Pooja Hegde. However, the makers have not made any official announcement yet. If reports of Rashmika teaming up with Thalapathy Vijay turns out to be true, then it would be the first time that these two would be sharing screen space. Fans of the duo would surely be excited to see this pair together on the big screens. Thalapathy 65 is said to be Thuppakki 2 and it is also said that AR Murugadoss would be helming this film. Thalapathy 65: Are Vijay and AR Murugadoss Teaming Up for Thuppakki 2?

Regarding this, a source revealed to Sify.com, that only Thalapathy Vijay as the lead actor, AR Murugadoss as the director and Thaman S as the composer have been confirmed for this flick that would be produced under the banner of Sun Pictures. The source also mentioned that the shooting of the film is expected to kick-off early next year. Let’s wait for an official word from the makers of Thalapathy 65!

(The above story first appeared on LatestLY on Jun 19, 2020 09:18 AM IST. For more news and updates on politics, world, sports, entertainment and lifestyle, log on to our website latestly.com).