Rashmika Mandanna is all set to share screen space with Karthi in Sulthan. It is the first time that these two have collaborated for a film. 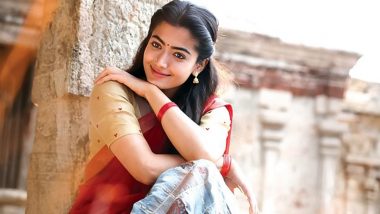 Rashmika Mandanna is all set to share screen space with Karthi in Sulthan. It is the first time that these two have collaborated for a film and fans are eagerly waiting to watch the duo on big screens. Besides that, Sulthan would also mark Rashmika’s debut in Tamil Cinema. She is a popular and one of the most loved actresses of Telugu Cinema and now she is all set to create magic in Kollywood as well. Sulthan Teaser: Karthi Turns a Messiah for the Villagers, Rashmika Mandanna Makes a Blink-n-Miss Appearance (Watch Video).

When the teaser of Sulthan had released, fans didn’t get to see much of Rashmika Mandanna in it. It was kind of a blink-n-miss appearance. However, you’d be intrigued to see these two stills of the actress from the sets of the film. In one of the pictures Rashmika is seen pretty in a half saree outfit. She is looking adorable as a village belle. In another picture, the actress dressed in a salwar kameez seem to be gearing up for a shot. Take a look at the pictures below: Kirik Party Actress Rashmika Mandanna Paired Opposite Karthi in Her First Tamil Film.

Touted to be an action entertainer, Sulthan is written and directed by Bakkiyaraj Kannan. Produced under the banner of Dream Warrior Pictures, the film’s music is composed by Vivek-Mervin and cinematography is handled by Sathyan Sooryan. Sulthan, all set to be released in theatres on April 2, also features Yogi Babu, Lal, Napolean, Hareesh Peradi, Ponnambalam and Ramachandra Raju in key roles.

(The above story first appeared on LatestLY on Feb 12, 2021 08:36 AM IST. For more news and updates on politics, world, sports, entertainment and lifestyle, log on to our website latestly.com).