Karthi and Rashmika Mandanna's upcoming film Sulthan's teaser is finally out. As promised by the makers, they dropped the first glimpse of the same at 5 PM on February 1, 2021, and well the video looks intriguing. Check it out. 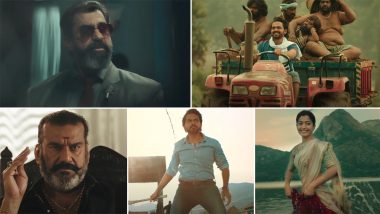 Karthi and Rashmika Mandanna's upcoming film Sulthan's teaser is finally out. As promised by the makers, they dropped the first glimpse of the same at 5 PM on February 1, 2021, and well the video looks intriguing. Helmed by Bakkiyaraj Kannan, the actioner is produced under the banner of Dream Warrior Pictures. Earlier to this, to keep the curiosity of fans intact, the makers have been sharing BTS stills and now the official teaser of the film is out. Along with it, they also revealed the release date of Sulthan, which is, April 2. Sulthan: Teaser Of Karthi’s Upcoming Action Entertainer To Release On February 1! (View Poster).

The video opens to a visual of a small village and then we see a house being burned. Cut straight to Karthi's entry, we see him as a messiah of the villagers, who are tortured by the baddie. Rashmika's little glimpse sees her as a simple village girl. Not just this, there are also some high-octane scenes in the movie. In a nutshell, this one looks a complete mass entertainer. Sulthan First Look Out! Karthi's Angry Young Man Avatar is a Show Stealer (View Pic).

Earlier, a few reports hinted that the makers are keen for an OTT release for Sulthan, but after seeing the thunderous response for Master, there's a change in plan. And well, along with the teaser, they also unveiled the theatrical release date of the movie. So, did you like the teaser? Tell us in the comment section below. Stay tuned!

(The above story first appeared on LatestLY on Feb 01, 2021 06:11 PM IST. For more news and updates on politics, world, sports, entertainment and lifestyle, log on to our website latestly.com).