RIP Bala: Thalapathy Vijay Offers Condolences to the Family of his Fan Who Died by Suicide 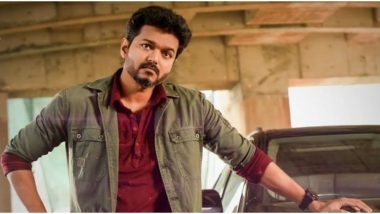 Thalapathy Vijay was in for a major shock when he heard the news of his fan passing away. Balamurugan, his ardent fan died by suicide on August 13 and an investigation for the same is underway. However, the actor ensured he called his fan's family and offer them his condolences.  Vijay spoke to Bala's mother Malarvizhi and his family members and also spoke to his fan association head in Kallakurichi to discuss Bala's sudden death. #RIPBala Trends on Twitter after a Fan of Thalapathy Vijay Dies by Suicide (View Tweets).

Balamurugan took such a drastic step for personal reasons and there were no other issues but some family problems. Over the last few days. he had been posting cryptic messages on Twitter saying how he's dying before watching Vijay's upcoming movie, Master. In one of his tweets, he had even asked his followers if they like him and what do they think of him. Thalapathy Vijay Donates Rs 1.30 Crore Towards COVID-19 Relief Funds! (Read Details).

The ongoing COVID-19 scenario in the country could be a reason for his suicide. Balamurugan was a civil engineer by profession and was working in a private company in Chennai. Due to the recent lockdown, he was compelled to return to his hometown and was unemployed for the past few months. His suicide was a major setback for other Thalapathy fans who started #RIPBala trend on Twitter. They even discussed the importance of mental health and how depression isn't easy to handle.

We pray for Bala's soul to rest in peace.

(The above story first appeared on LatestLY on Aug 14, 2020 11:28 PM IST. For more news and updates on politics, world, sports, entertainment and lifestyle, log on to our website latestly.com).