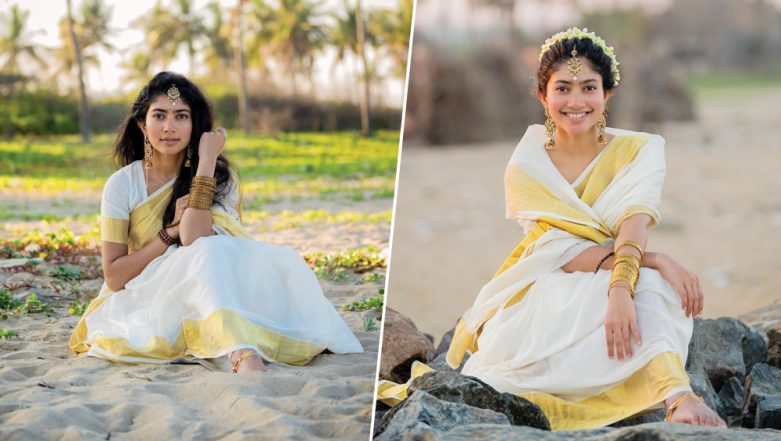 Widely known as Malar, her role in the Malayalam film Premam, which also happened to be her first film in Mollywood, Sai Pallavi’s character in it instantly shot to fame. She is known for her simple avatar. Her performances has been applauded by audiences and critics. But it is her simple style that caught everyone’s attention. Sai has also done few films in Tamil and Telugu. The actress is presently in buzz for a picture which she posted on Instagram. Sai seems to be super excited to welcome Vishu 2019 and much ahead of this auspicious festival, she has shared few pictures of her in which she is dolled up in the traditional kasavu saree. The actress is looking absolutely ethereal in the traditional Kerala outfit and fans just can’t stop praising her look. Is Amala Paul’s Ex-Husband AL Vijay Dating NGK Actress Sai Pallavi?

Vishu is the New Year Hindu festival celebrated in Kerala, observed by Malayalees. Sai Pallavi has donned the traditional attire like most women in Kerala do on the auspicious occasion. She kept her look minimal – accessorised with maang tika, jhumkas, bangles and gajra. Her typical Malayali look has definitely won netizens’ hearts and she has also given ideas to many young girls on how they can doll up on this special day. This year Vishu is falling on April 15 and many households in Kerala must have started prepping up for the occasion already. Premam Fame Sai Pallavi to Play Mahesh Babu’s Love Interest in Anil Ravipudi’s Next?

Take a look at Sai Pallavi’s pictures below:

On the work front, Sai Pallavi will be seen in the Tamil film NGK: Nandha Gopalan Kumaran, directed by Selvaraghavan. The film which also stars Suriya and Rakul Preet Singh in the lead, is set to release on May 31.