Salaar: Shruti Haasan Roped In To Play the Female Lead Opposite Prabhas!

The makers of Salaar dropped an update about this Prabhas film and announced that Shruti Haasan is now part of the project. On the occasion of the actress' birthday today, this good news made it to the internet. Check it out. 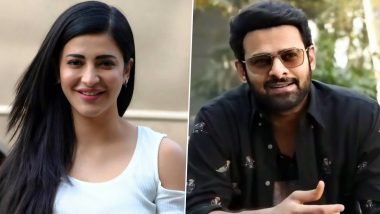 The makers of Salaar dropped an update about the film and announced that Shruti Haasan is now part of the project. On the occasion of the actress' birthday today, this good news made it to the internet. However, nothing in-depth about her character has been revealed as of now. Salaar stars superstar Prabhas as the lead and it'll be interesting to see Shruti and him in a single frame together. The movie is helmed by KGF fame Prashanth Neel and is expected to see Prabhas in a never-seen-before violent avatar. Shruti Haasan Birthday: From Gabbar Singh To Race Gurram, 5 Commercially Successful Films Of The Stunning Actress!

Coming back to Shruti, she will be seen romancing the Baahubali actor for the very first time. Prabhas took to his Facebook and welcomed Haasan onboard. “Happiest Birthday Shruti Haasan! Looking forward to working with you on #Salaar,” he wrote. A few reports also hint that Vijay Sethupathi will play a pivotal role in the film, however, nothing is made official yet by the makers. Salaar: Prabhas Starrer to Go on Floors on January 15 in Hyderabad.

We're ecstatic to have you onboard for #Salaar. Can't wait to see you sizzle on the screen. #Prabhas @prashanth_neel @VKiragandur @hombalefilms pic.twitter.com/Zkx5xL3YmP

Earlier this month, Saalar was launched in Hyderabad with a muharat puja. Workwise, after completing the shooting of romantic drama Radhe Shyam, Prabhas will join the sets of Salaar. On the other hand, Shruti Haasan was last seen in Krack opposite Ravi Teja. The film despite 50 percent occupancy was a hit in the Telugu states.

(The above story first appeared on LatestLY on Jan 28, 2021 11:49 AM IST. For more news and updates on politics, world, sports, entertainment and lifestyle, log on to our website latestly.com).