Soorarai Pottru was one of the most-awaited films of Kollywood superstar Suriya and it has finally been released on Amazon Prime Video on November 12. 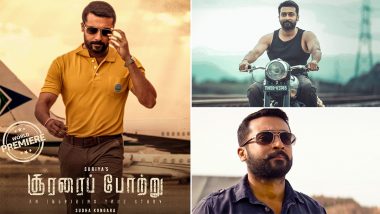 Soorarai Pottru was one of the most-awaited films of Kollywood superstar Suriya and it has finally been released on Amazon Prime Video on November 12. Fans and critics were not only curious to watch this intriguing tale based on the life of GR Gopinath, founder of Simplify Deccan (formerly known as Air Deccan), but all were anxiously waiting to watch Suriya’s performance as well. And after watching Soorarai Pottru, critics have not only given a thumbs up for the inspiring tale, but have also labelled Suriya’s act as his best outing in a long time. Soorarai Pottru Movie Review: Suriya Flies High in Sudha Kongara’s Well-Told and Immersive Underdog Tale.

The fine writing and outstanding performances in Soorarai Pottru, directed by Sudha Kongara, has left the audience impressed. Suriya is one of the finest actors of Tamil Cinema, however, in recent times he had not been able to deliver a robust performance and his films even tanked at the box office. However, he is back in action with Soorarai Poottru by portraying the role of Nedumaaran Rajangam aka Maara. Let’s take a look at the reviews shared by critics. Soorarai Pottru Trailer: Suriya Starrer Is An Inspiring, Intense Tale And A Perfect Treat For Diwali 2020! (Watch Video).

The News Minute - Like Sudha's Irudhi Suttru, Soorarai Pottru is also an underdog story, but this time with a man at the centre taking the punches. Suriya as Nedumaran Rajangam or Maara is in fine form, switching between angry young man to conflicted son, romantic husband and cussing businessman. Soorarai Pottru is easily Suriya's best outing in a long time. It's a pleasant flight even if there's some turbulence along the way.

The Hindu - Suriya as Maara holds the show together. After slightly tepid outings in his last few films, the actor scores highly as a man besotted with a dream and willing to go to any lengths to achieve it. Helping him put up a good show is composer GV Prakash, whose Veyyon Silli and Usurey numbers set the right tone.

Firstpost - One of the biggest successes of Soorarai Pottru is that it is a fantastic love story. It shows us marriage equality, in ways that are intricate. More than once, we see Maaran standing at the crossroads of his dreams and family.

Times Of India - The writing is pretty solid all round. From the efficient analogy of a Udipi hotel vs five-star that she uses to make the audience understand her protagonist's dreams to the heartwarming scene of an entire village chipping in with their money to make this dream come true, the director gives us memorable moments and memorable characters.

Soorarai Pottru released today simultaneously with its dubbed versions in Kannada and Malayalam under the same title. It has also premiered in Telugu as Aakasam Nee Haddu Raa. The film is currently streaming on Amazon Prime Video.

(The above story first appeared on LatestLY on Nov 12, 2020 10:41 AM IST. For more news and updates on politics, world, sports, entertainment and lifestyle, log on to our website latestly.com).