Soorarai Pottru is a underdog drama, inspired by real life stories in Indian aviation. Directed by Sudha Kongara, the movie stars Suriya and Aparna Balamurali in the lead, with Mohan Babu, Paresh Rawal, Urvashi, and Karunas in the supporting cast. Soorarai Pottru is streaming on Amazing Prime Video. 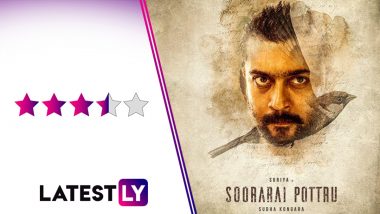 Soorarai Pottru Movie Review: Watching Soorarai Pottru, the new Tamil film streaming on Amazon Prime Video, reminded me of that infamous Freedom mobile offer. Remember how a company wanted to bring mobile phones costing Rs 500 only to the masses, creating a wave of excitement, as well as scepticism? While that scheme went bust, the incredulous-sounding story shown in Sudha Kongara's film is partly inspired from a actual real-life success story - that of Air Deccan founder GR Gopinath. Soorarai Pottru Trailer: Suriya Starrer Is An Inspiring, Intense Tale And A Perfect Treat For Diwali 2020!

The crux of Soorarai Pottru is simple - why should all the new scientific breakthroughs should be the privilege of the rich first? Why does it still take years for railways, internet and even electricity to reach deep pockets of this country? Can a country that is running in losses when it comes to aviation industry, afford to have an airline that is affordable to all? If you are mad enough to believe in the vision of Maara (Suriya Sivakumar) , you might believe in that idea too.

Maara, a former IAF pilot, wants to start an airline business that even the poor can afford to travel at minimal cost, without finding itself in losses. Through a flashback involving his Gandhian father, we come to know as to why Maara is so invested in his dream. He finds support first in his mother (Urvashi), and later in Bommi (Aparna Balamurali), a fiesty girl with her own dreams of being an entrepreneur.

Since Maara's idea is a game-changing revolution in the aviation game, of course, he faces obstacles and roadblocks in form of red-tapism, corruption and sabotage. The biggest of them being from Paresh Goswami (Paresh Rawal), the OCD-afflicted owner of a premium airline who sees Maara as a huge threat to his profits. The rest of the film is about if Maara can make his dream of seeing the rural India fly in what he calls a 'Udipi hotel in the sky'! After all, even a plane needs to run first on the ground, before it can take to the skies.

Watch the Trailer of Soorarai Pottru:

Soorarai Pottru is one of the superstar movies in South that belong to a genre of its own - an underdog building an utopian idea out of a social cause. It is a tried and tested formula that work well with the sentiments of our masses, most of them still suffering from class and caste divide. Last week, we saw the Telugu film Miss India attempt something similar and fail spectacularly, despite the commanding presence of Keerthy Suresh.

Interestingly, apart from the formula, Miss India and Soorarai Pottru have a couple of other things in common. Both the films begin with a scene from the future before they go back to how the protagonists reached to that point. Their antagonists are both self-made narcissistic men, who wants the world to only recite their success stories and they do all they can to not allow the undedogs to rise.

But while Keerthy Suresh's film is let down by its trite storytelling and execution, her Thaana Serndha Koottam co-star's film benefits from the fact it manages to keep the viewer engaged throughout with its believable narrative and engaging direction. Even if it refuses to change how to deal with the formula. Putham Pudhu Kaalai Movie Review: The Amazon Prime Anthology Film Brings Well-Acted Heartwarming Stories of Love, Bonding and Miracles!

Sudha Kongara never makes Maara's journey an easy flight of fancy, and rightly so, which makes it so much easier to relate to (even when the film plays with convenience tropes). With every little victory, Maara faces an even bigger roadblock at the next step. We begin to feel his frustration at not able to making it right, having been so used to superstar films, where everything is made so easy. Even the climax toys around with both the hero, and the audience's emotions, before delivering that knockout punch. That's what is Kongara's victory here - even with its drawbacks, namely, its pacing problems and stubbornness to stick to a template, Soorarai Pottru keeps the viewer invested in the protagonist's ups and downs.

It also helps some of the better scenes of the film are that between Maara and Bommi, bringing a more personal investment to the story. While still a support card for the protagonist, Bommi is made of a material stronger than her husband, while supporting him even in his lowest of the lows. In a scene where Maara, drowned in frustration, lashes out his wife and disses her bakery business, she doesn't hold back and gives him an earful. showing he just can't take it out on her. Aparna Balamurali is absolutely scene-stealing in the role, nailing both the accent and mannerisms right, and getting some lovely lines in the process.

But Soorarai Pottru truly belongs to Suriya. He is a superstar who brings classiness in even mass movies, nuances even in gallery-appeasing sequences. Which is why, save for Thaana Serndha Koottam, I was unhappy with some of his recent films, that felt they wanted to please his fanbase a bit too much. With Soorarai Pottru, Suriya gets an author-backed role and he delivers a wonderful performance that conveys both the despair and jubilation of his character with panache. Suriya is an actor who can convey a lot just with his eyes, which Kongara puts to amazing use here. Shorn of quirks that adorn a superstar image and yet not so much that he alienates his normal fans, Suriya's Maara becomes a character worth rooting for, because he is almost believable.

Among the supporting cast, Urvashi shows her versatility in the flashback sequence where she berates her son for arriving too late to meet his father. Telugu actor Mohan Babu offers a few surprises in the role of Maara's former IAF CO. Paresh Rawal is okay as the vain antagonist, who doesn't get to anything beyond just a trouble-causer for the hero. Paresh Rawal To Make His Kollywood Debut With Soorarai Pottru! Veteran Actor Shares His Experience Of Working With Suriya.

GV Prakash Kumar's gels nicely with the story-frame, with "Kaattu Payale" being a standout. There are some VFX issues in the scenes involving Maara's aircraft, but not much to distract you from the story.

Soorarai Pottru is a well-told underdog story, that is both emotionally captivating and grounded, while still reaching for the skies when it comes to meeting our expectations. The film is streaming on Amazon Prime Video.

(The above story first appeared on LatestLY on Nov 12, 2020 12:00 AM IST. For more news and updates on politics, world, sports, entertainment and lifestyle, log on to our website latestly.com).