It is with a heavy heart that we had to write that SP Balasubrahmanyam - a fine human being, a decent actor and an amazing singer - is no longer with us. The legendary singer passed away in Chennai at MGM Healthcare. He was 74. 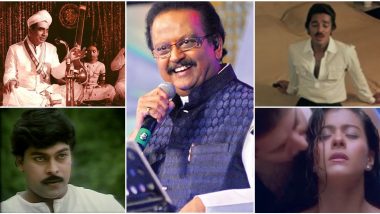 It is with a heavy heart that we had to write that SP Balasubrahmanyam - a fine human being, a decent actor and an amazing singer - is no longer with us. The legendary singer passed away in Chennai at MGM Healthcare. He was 74. SPB, as fans lovingly abbreviated his name, was not keeping well for the past few weeks, and has been in intensive care and ventilation support, before he breathed his last. He was suffering from breathing difficulties owing to COVID-19. RIP SP Balasubrahmanyam: 8 Melodious Songs That Are Proof of Why the Late Singer Was the Perfect Playback Voice for Salman Khan! (Watch Videos).

SP sir's die-hard fans know of the fact that he is holder of a great Guinness Book Record, of singing more than 40,000 tracks in mainly four languages Kannada, Telugu, Tamil, and Hindi. He has sing some very beautiful tracks for music composers Ilayaraja and AR Rahman, and he was very popular with stars like Kamal Haasan, Rajinikanth, Salman Khan etc. SPB had won six National Awards for his songs, apart from the civilian awards - Padma Shri and Padma Bhushan - that he got from the government of India.

In this special tribute feature, we look at the six songs that won the legend National Awards.

This beautiful track from an even beautiful Telugu classic was composed by KV Mahadevan. Giving an excellent SPB some prestigious company is another legendary singer, S Janaki. "Omkaara Naadaanusandhanam" is a difficult song to sing, so SPB's first National Award was well-deserved! SP Balasubrahmanyam No More: Salman Khan, Akshay Kumar, Ajay Devgn and Others Mourn his Tragic Demise (View Tweets).

This popular song, from the Hindi remake of the Telugu film Maro Charitra, starring Kamal Haasan and Rati Agnihotri, was composed by Laxmikant–Pyarelal with lyrics by Anand Bakshi. There are two versions of the song, a happy one sung Lata Mangeshkar, and a sad version sung by SP Balasubrahmanyam. It is for the sad track that SPB won the National Award in 1981.

Kamal Haasan seems to be a lucky charm for SPB (or is it the other way around?), as SPB scored his third National Award for this another classical track. Saagara Sangamam was a Telugu film that came out in 1983 and was directed by K Viswanath. Ilayaraja had composed the songs.

In 1988, SPB won his fourth National Award for singing this unconventional semi-classical track, from Rudraveena, composed by Ilaiyaraaja again. Rudraveena starred Megastar Chiranjeevi and Shobana in the lead.

Seven years later, SPB scored his first National Award win in Kannada language in the long-named, Sangeetha Sagara Ganayogi Panchakshara Gavai. "Umandu Ghumandu Ghana" is an amazing Hindustani classical song, based on a song by Tansen, and a proof of the versatility of SP Balasubrahmanyam as a singer.

Though he is thought predominantly as a Tamil singer (his discography suggests otherwise), SPB had only one National Award in Tamil Cinema, and that came through Ilaiyaraaja's former protege, AR Rahman. SPB won his last National Award for this funky romantic track from Rajeev Menon's romantic drama, picturised on Arvind Swamy and Kajol. Minsara Kanavu was dubbed in Hindi as Sapnay, with SPB also crooning the Hindi track - "Door Na Mujhse".

Rest in peace, dear SPB sir! You, your songs and your performances will always be cherished in our hearts forever!

(The above story first appeared on LatestLY on Sep 25, 2020 03:11 PM IST. For more news and updates on politics, world, sports, entertainment and lifestyle, log on to our website latestly.com).