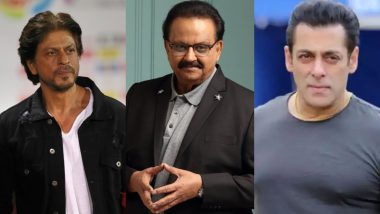 SP Balasubrahmanyam breathed his last on the afternoon of September 25. The veteran singer was admitted to Chennai's MGM hospital where he was initially getting his treatment for COVID-19. His son, SP Charan who was regularly updating his fans about his father's health condition, confirmed his demise by saying his legacy will live on forever. SPB's demise is a major blow to the entire Indian entertainment industry. While celebs in South are offering their condolences to his grieving family, B-town actors too are praying for his soul to rest in peace.

Bollywood stars like Salman Khan, Akshay Kumar, Ajay Devgn, Neil Nitin Mukesh, Anupam Kher are among the many names who tweeted their shocking reactions to SP Balasubrahmanyam's tragic demise. Check out their sad reactions. RIP SP Balasubrahmanyam: 8 Melodious Songs That Are Proof of Why the Late Singer Was the Perfect Playback Voice for Salman Khan! (Watch Videos).

Condolences to SP Balasubrahmanyam sir’s family and friends on the loss. May the legendary singer’s soul Rest In Peace... Will miss his soothing voice.

Heartbroken to hear about #SPBalasubrahmanyam sir... you will forever live on in your undisputed legacy of music! condolence to the family #RIP

Deeply saddened to hear about the demise of Balasubrahmanyam ji.Just a few months back I’d interacted with him during a virtual concert in this lockdown..he seemed hale,hearty & his usual legendary self...life is truly unpredictable. My thoughts & prayers with his family🙏🏻#RIPSPB pic.twitter.com/NytdM7YhBL

SP Balasubrahmanyam Sir’s voice dominated my initial years of cinema. He, of course, had been a legend from long before. Sad 😞 to learn of his passing. Condolences to his family. #RIPSPB sir 🙏🏻

My deepest condolences to the entire family. This is really sad news indeed. Have loved all his songs. His voice and style was unparalleled. May you Rest in peace sir !!🙏🏻 #SPBalasubrahmanyam pic.twitter.com/aLyoMPHYuB

SP Balasubrahmanyam was admitted to MGM hospital in August after he was tested positive for COVID-19. While doctors had advised him to observe home quarantine, he insisted on getting admitted for his family's safety. While his coronavirus report came in negative on September 4, his condition didn't improve but got deteriorated further. The actor was on life support since the last couple of days but eventually lost his long battle.

We at LatestLY pray for his departed soul to rest in peace.

(The above story first appeared on LatestLY on Sep 25, 2020 02:54 PM IST. For more news and updates on politics, world, sports, entertainment and lifestyle, log on to our website latestly.com).