The actress shared a picture with Pawan Singh asking him to help her. She posted a strong message with the picture saying that she is tired of all the hate she is receiving online. 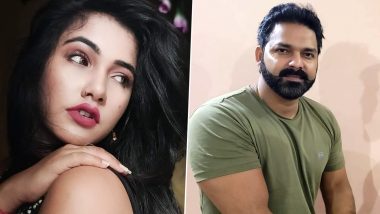 Trisha Kar Madhu, who works predominantly in the Bhojpuri film industry, has been trending online for all the wrong reasons. The actress became a victim of an MMS leak and has been getting trolled mercilessly for the same by netizens. The actress has been reacting to the backlash with posts on social media and in an attempt to save herself from any further bashing, she has posted a picture with Bhojpuri star, Pawan Singh. Pawan Singh Thrashes Co-Star Akshara Singh! Bhojpuri Actor Held Her Hair and Slammed the Actress Against the Wall.

The actress shared a picture with Singh asking him to help her. She posted a strong message with the picture saying that she is tired of all the hate she is receiving online. She further added that she is posting a picture with the superstar because he is the only person she knows who is genuine and would help her. She went on to add that other celebs in the industry are just fake, and are only trying to look good on social media.

The actress also shared a video of her crying. She admitted that while she shot the MMS video herself, she has no idea who leaked it. She also got back to the haters for slamming her for something that is not her fault. The video has garnered around 5.5K reactions and 184K views within a few hours of its release.

While she thought posting the video and the post would help the online bashing to slow down, netizens got even angrier. Many users replied to her posts saying that she should not use Pawan Singh as a medium to get more attention.  Many went on to share jokes on her situation, slamming for doing such a deed.

Addressing the issue initially,  the actress had shared on her social media, “God is watching everything. In a bid to defame me, some people made this video viral. If your sister gets married and the next day, someone leaks her first-night video, it will be good right?” Bhojpuri Star Pawan Singh Lodges FIR in Lucknow Against Professional Rivals over Maligning His Image.

Trisha Kar Madhu is from Bengal and made her screen debut with the Bhojpuri serial Ham Hai Hindustani. She also made an appearance in several item songs with the leading actors of the Bhojpuri film industry. She will be next seen in a film with Pawan Singh.

(The above story first appeared on LatestLY on Aug 18, 2021 08:00 PM IST. For more news and updates on politics, world, sports, entertainment and lifestyle, log on to our website latestly.com).