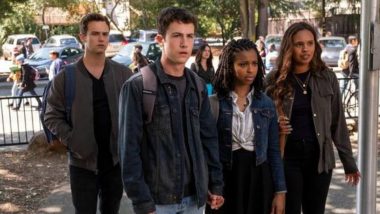 The final season of popular teen drama, 13 Reasons Why released recently. One of Netflix's popular high-school set show ended with its fourth season that saw Dylan Minette, Brandon Flynn, and Alisha Boe return. While a video of the reading session of the finale had shown the lead stars of the show in a puddle of tears, it looks the finale has done the same for many viewers. While reviews for the final season haven't been extremely favourable with many critics believing that the show stretched way ahead of its deserved journey which seemed relevant and ideal when it revolved around Hannah Baker (Katherine Langford). 13 Reasons Why Season 4 Review: Netflix’s Controversial Teen Show Gets Lost in Its Bloat Before Getting Its Act Right in the Emotional Finale.

After season three saw the death of another lead character, Bryce Walker (Justin Prentice) and the blame of his death being pinned on Monty, the new season digs deep into the secrets of Bryce's actual killing as the truth finally comes out. The final season has been deemed to be one of the most emotional ones as the main characters bid adieu to a few dead as well as living characters.

Given how popular the show has been and the kind of controversies it has been involved in, Twitterati were quick enough to share their thoughts on the big finale. 13 Reasons Why Final Season Trailer Is Here and It Is Bound To Keep You On The Edge of the Seat (Watch Video).

Justin and Clay Making Us Teary-Eyed!

Emotional State After Watching the Finale:

I just watched the series finale of #13ReasonsWhy and this is how I’m feeling: pic.twitter.com/HT3j8uTmhX

All About Pain and Loss:

I have to say, I really loved s4 of 13rw. That shit had me biting my nails but godDAMN did I cry my broken heart out. I don't have any complaints. I really learned a lot about pain,loss,love, and my own mental illness. I want to say THANK you for giving me hope. ❤

After Watching the Finale:

The end of episode 9 #13ReasonsWhy pic.twitter.com/4aKm2OS1dV

that final scene between Clay and Justin😭 #13ReasonsWhy pic.twitter.com/3g2Br7swp8

I didn't expect that we would need a third and fourth season but after watching, I think it's a great job for the series crew.

We will miss them 😭#13ReasonsWhy pic.twitter.com/wMaaynYUZo

While some elements of the show's storyline haven't gone well with the critics as well as audiences, it seems the emotional ending of the show brought everything together. If you haven't watched it yet, 13 Reasons Why Season 4 is currently streaming on Netflix India.

(The above story first appeared on LatestLY on Jun 06, 2020 09:32 AM IST. For more news and updates on politics, world, sports, entertainment and lifestyle, log on to our website latestly.com).