After comedian Bharti Singh and husband Haarsh Limbachiyaa were arrested by the NCB on November 22, 2020 for consumption of drugs, they have been sent them to judicial custody for until December 4, 2020. 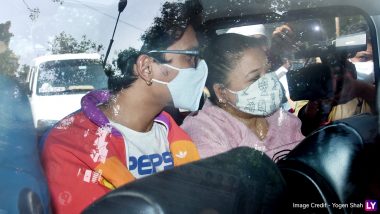 Comedian Bharti Singh and husband Haarsh Limbachiyaa were arrested by the NCB on November 22, 2020 after drugs were found at their residence during a raid and the duo admitted to consumption of drugs during questioning. The duo was taken for an examination on November 22 and a Mumbai Special Court has sent them to judicial custody for 13 days, until December 4, 2020. Bharti Singh Arrested By NCB For Consumption of Drugs, Haarsh Limbachiyaa Being Examined: Reports.

Bharti and Haarsh have applied for bail which will be heard on Monday, November 23. 86.50 gms of Marijuana (Ganja) was seized from Bharti and Haarsh's house. Their arrest came after two drug peddlers who were arrested from Khar-Danda on Saturday, November 21, named the couple. After Arrest By NCB, Bharti Singh And Haarsh Limbachiyaa Taken To Mumbai Hospital For Medical Examination.

As per reports in Bombay Times, Bharti and Haarsh were arrested under the provisions of the NDPS Act for alleged possession and consumption of Ganja. NCB also issued a press release wherein they mentioned that the couple had accepted to consuming Ganja.

(The above story first appeared on LatestLY on Nov 22, 2020 06:13 PM IST. For more news and updates on politics, world, sports, entertainment and lifestyle, log on to our website latestly.com).