After raiding Bharti Singh and Haarsh Limbachiyaa's Mumbai home on November 21, 2020, the Narcotics Control Bureau have now arrested Bharti and Haarsh is being examined, after the pair admitted to consumption of Ganja that was found at their residence. 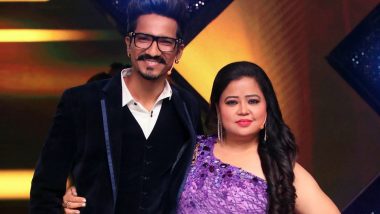 On the morning of November 21, 2020, the Andheri residence of comedienne Bharti Singh and husband Haarsh Limbachiyaa was raided by the Narcotics Control Bureau, Mumbai and as per reports, drugs were seized. The duo was issued summons and were taken to the NCB office for questioning in the afternoon. And now, latest update coming in states that Bharti has been arrested for consumption of Ganja and Haarsh's examination is underway at the time of writing this article. Drug Probe: NCB Conducts Raid At Bharti Singh And Haarsh Limbachiyaa’s Residence In Mumbai, Issues Summons To The Couple.

As per an ANI Tweet, 86.5 gms of ganja was recovered from Haarsh and Bharti's home and the couple also admitted to consuming of ganja. Bharti SIngh has been arrested and Haarsh is undergoing medical tests. Bharti Singh and Haarsh Limbachiyaa Reach NCB Office For Questioning After House Raid (View Pics).

The drug angle probe into Bollywood kickstarted with the arrest of Rhea Chakraborty and brother Showik Chakraborty as the duo was under the scanner after actor Sushant Singh Rajput died by suicide on June 14. Post that, a host of other celebrities like Arjun Rampal and girlfriend Gabriella Demetriades, Sara Ali Khan, Shraddha Kapoor, Rakul Preet Singh, Deepika Padukone and her manager Karishma were questioned by the NCB. TV actor Abigail Pande and her choreographer boyfriend Sanam Johar's home too was raided and the couple were questioned.

(The above story first appeared on LatestLY on Nov 21, 2020 07:00 PM IST. For more news and updates on politics, world, sports, entertainment and lifestyle, log on to our website latestly.com).