Bigg Boss 12: Ranveer Singh and Salman Khan to Groove On ‘Aankh Maarey’ From Simmba – Deets Inside 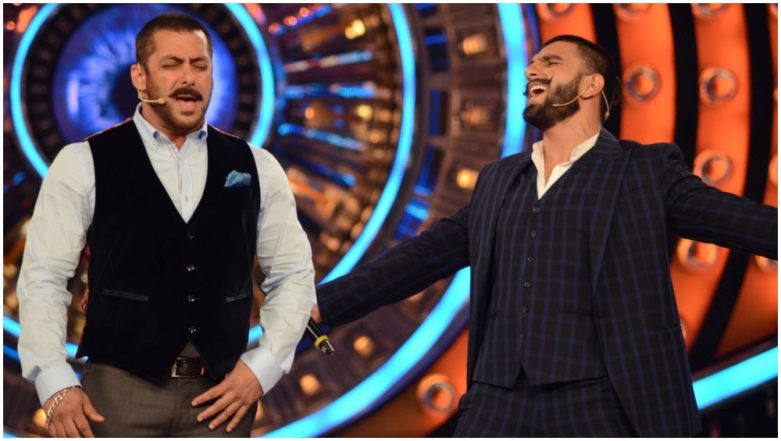 Ranveer Singh and Sara Ali Khan starrer 'Simmba' is one of the most awaited films set to release this year. While the film is less than a month away from its release, the excitement surrounding its release is at its peak. After Ranveer wowing us with his mind-boggling performance as Alauddin Khilji in Deepika Padukone and Shahid Kapoor starrer Padmaavat, fans can't wait to see the actor to return as a quirky cop in Simmba. As the film is all set to hit the silver screens on December 28, 2018, Ranveer Singh is leaving no stone unturned to promote his upcoming film Simmba. Ranveer Singh and Sunil Grover Turn Allaudin Khilji - Malik Kafur but With a Twist – View Pics

The actor, who is on a promotional spree, visited the sets of controversial reality TV show Bigg Boss 12 to promote his forthcoming film. Yes, you read that right. After Shah Rukh Khan, Ranveer Singh is gearing up to make an appearance on the twelfth season of the reality show, Bigg Boss, which is hosted by Salman Khan. However, it is yet not known if Sara Ali Khan will the team on the television show. We wonder why she hasn't made it to this set of promotions or is she the surprise element?

Talking about the same, Mumbai Mirror quoted a source as saying, "Ranveer and Rohit will be shooting for the Saturday and Sunday episodes. A lot of fun tasks have been planned where the duo gets to interact with the housemates. The host will also quiz the actor on his recent wedding to Deepika Padukone and some fun, entertaining moments are expected."

According to a report in Mumbai Mirror, Ranveer Singh and Salman Khan will groove to the popular track Aankh Maarey from Simmba, besides performing on their popular dialogues. Also, Rohit Shetty, who will be joining Ranveer on the reality show, will also announce his own reality show Khatron Ke Khiladi season 9 that kick-starts from January.

On the professional front, Ranveer will also be seen in ‘Gully Boy’ with Alia Bhatt, which will hit the big screen on February 14, 2018. The actor has also been brought on board for a film titled ’83’, which is a story of India’s first Cricket World Cup Win. Watch this space for further updates.