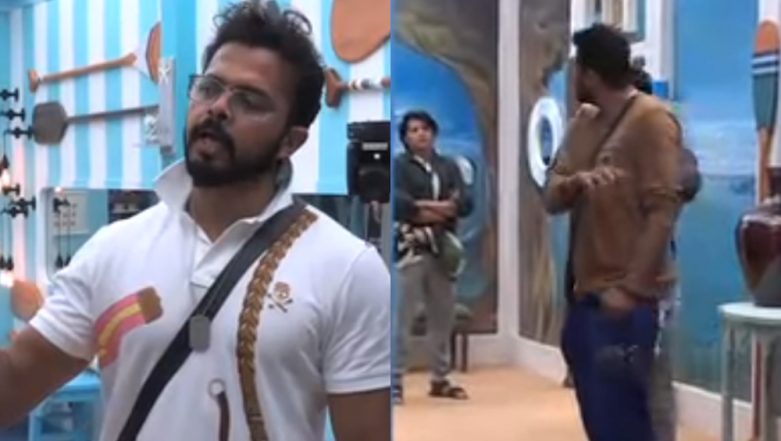 The 12th season of Bigg Boss is finally gaining some momentum. The reality show started on quite a dull note but with every passing day, it is becoming more and more interesting. The latest update is that Romil Choudhary has threatened to slap Sreesanth, only to get the same threat in return. We doubt Sreesanth will be able to handle another slap on national TV. Just the threat of it must have been enough to boil his blood. Bigg Boss 12: Do You Smell Something Fishy in Anup Jalota and Jasleen Matharu’s Breakup?

In the just-released promo of Bigg Boss 12's next episode, you can see that Romil and Sreesanth get into an argument. Sree says that his best friend is a better lawyer than Romil. And Romil claims that he is a better spinner than the cricketer. The argument escalates further and Romil threatens to slap Sreesanth.

In return, Sree says that before going out of the house, he will surely beat up Romil. If it does happen, it won't be the first incident of physical violence on Bigg Boss. Tanushree Dutta-Nana Patekar Row: Will Actress Be a Bigg Boss 12 Contestant? MNS Workers Threaten To Stop Telecast if She Enters BB House.

Let us go through a recap of Sreesanth-slap gate that made headlines for years.  Duril IPL 2008, Harbhajan, leading Mumbai Indians' side, slapped Sreesanth - playing for Kings XI Punjab - when latter said something to him which the off-spinner found offensive. Sree was seen crying bitterly on the ground at the end of the IPL match.

While chatting up with Farah Khan on her show, Tere Mere Beach Mein, Sreesanth recalled the incident. He had said, "After the other team lost the match, I went up to Bhajji and sarcastically told him "Hard luck". In a fraction of second, it [the slap] just happened. I cried and on the same day, we were having dinner together. I only got to know that it has become such a big media issue the next morning."

"I was shocked but it was like my elder brother hit me in the house," Sree further added.