Bigg Boss 14: Gauahar Khan Says She Will Set the Rules of the House, Shows Us a Glimpse of Her Premiere Night Dance Performance (Watch Video) 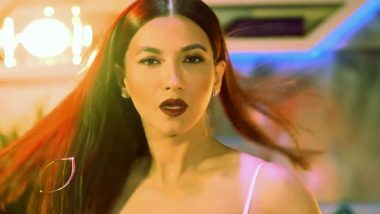 Did you miss seeing Gauahar Khan in Bigg Boss? Her season was one of the best. The winner of Bigg Boss 7 is returning to the house for Bigg Boss 14 on October 3. Rumour has it that she, along with Sidharth Shukla, Hina Khan and Prince Narula, will act as mentors to the new contestants. We will have the exact details when the show premieres. For now, we have a brand new promo featuring Gauahar. In the new footage, we not only get a glimpse of her dance performance but also, we learn a little about her role in the game. Bigg Boss 14: Gauahar Khan Is Changing the Game in the New Promo of Salman Khan's Show (Watch Video).

Gauahar will be dancing on "Oye Oye" song Azhar. She is looking smokin' hot wearing a white outfit. Gauahar says in her promo that last time she had to follow the rules, but this time, she'll be making the rules. While we are excited to see Gauahar set the rules, might we remind the number of times she did break the rules on Bigg Boss 7, including the time she literally walked out of the show. All Bigg Boss Seasons Ranked From Worst to Best.

Bigg Boss 14 will premiere on October 3. As per rumours, the house will replicate the life before the lockdown, meaning there will be a mall, a spa among other facilities in the premises. Kumar Sanu's son Jaan Kumar Sanu has been confirmed as a contestant. A promo showing Radhe Maa inside the house has also aired on TV.  The rumoured list of contestants includes Indeep Bakshi, Pavitra Punia, Gia Manek, Jasmin Bhasin, Amrapali Dubey, Sneha Ullal, Karan Patel, Eijaz Khan, Naina Singh, Nishant Singh Malkani to name a few. Neha Sharma and CarryMinati were also rumoured to be joining the show, but both of them denied the reports.

(The above story first appeared on LatestLY on Sep 30, 2020 09:33 PM IST. For more news and updates on politics, world, sports, entertainment and lifestyle, log on to our website latestly.com).