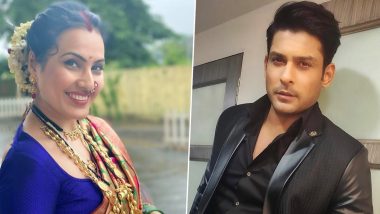 The controversial reality show Bigg Boss 14 started airing from October 3 with a grand launch, hosted by none other than Salman Khan. This year one of the main twists in the show is that the toofani seniors (mentors) namely Sidharth Shukla, Hina Khan and Gauhar Khan are here to rule the house. Now, ex Bigg Boss contestant Kamya Punjabi has quite an amazing observation with regards to the latest season and we at a point do agree with her. Punjabi took to her Twitter and heaped praises at Sidharth Shukla. Bigg Boss 14 Preview: Seniors Sidharth Shukla and Gauahar Khan Indulge In An Heated Argument Amid Assigning Tasks To BB14 Contestants (Watch Video).

In her tweet, the Shakti actress mentioned that how Bigg Boss 14 looks like Bigg Boss 13, courtesy Sidharth. However, she did not stop there and further also mentioned how Shukla is snatching the limelight once again. For the unversed, Kamya is a huge Bigg Boss fan and scans each episode. Well, we couldn't agree more to her. Also, we feel that the current season's contestants are getting sidelined because of the mentors. Bigg Boss 14: Nikki Tamboli Tries to Stir Up Controversy, Says Rahul Vaidya Used To Send Her Heart Emojis, Voice Notes and Messages!

Is this #BB13 ? This looks like a @sidharth_shukla show again 😃 you stealing it again my friend 👌🤩😃 #BiggBoss14 @ColorsTV

Bigg Boss 13 winner Sidharth Shukla is surely a charmer as if u remember his season, it was all about him. Talking about Bigg Boss 14, the mentors will be staying with the contestant for about 14 days. Currently, all the seniors have special powers where the bedroom area is ruled by Sid, Hina has the power to all the luxuries amenities in the house and Gauahar's ruling the kitchen. Stay tuned!

(The above story first appeared on LatestLY on Oct 05, 2020 05:53 PM IST. For more news and updates on politics, world, sports, entertainment and lifestyle, log on to our website latestly.com).