Bigg Boss 14 contestant Nikki Tamboli on the day 1 of the show claimed that Rahul Vaidya used to slid into her DMs and send her hearts, voice notes and messages. What's cooking? 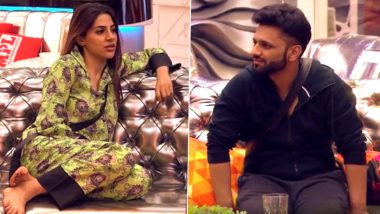 Bigg Boss 14 aired its first-ever episode on October 4, 2020, and as expected the day was full of mayhem. Right from the three mentors namely Sidharth Shukla, Gauahar Khan and Hina Khan plotting strategies for the inmates to Nikki Tamboli's fights, the day one and little glimpse of the day two was quite okay-ish. However, one thing quite explosive came out from the episode and it was a revelation made by Tamboli. Well, as claimed by the South actress, she knows singer Rahul Vaidya very well and they are also connected via messages and more. Bigg Boss 14 October 4: From Radhe Maa Ki Chowki To Nikki Tamboli’s Manicure Drama, 5 Interesting Highlights From Day 1 Of The Reality Show!

It so happened that as a task given by the mentors to Rahul where he had to get a kiss from a female contestant of the show. And to be successful in the same, he also requested Tamboli to kiss him. Nikki in connection to Rahul's this behaviour opened to Nishant and Jaan Kumar and also claimed on national television that the singer used to send her heart emojis, voice notes and messages on chat. Like really, we wonder, what's cooking? Bigg Boss 14: Paras Chhabra Hits Back at Ex-Girlfriend Pavitra Punia, Reveals She Was Married to Someone Else.

While this is just one sided story and we do not know if there is any truth to it, but then it can also be a reality. Well, as the day will pass by in the Bigg Boss 14 house looks like many revelations will be out. We also bet when Rahul Vaidya will come to know that Nikki has been feeding others by saying all this about him behind his back... something big is gonna happen. Stay tuned!

(The above story first appeared on LatestLY on Oct 04, 2020 11:42 PM IST. For more news and updates on politics, world, sports, entertainment and lifestyle, log on to our website latestly.com).