Call it a shocking eviction of sorts, it's Eijaz Khan who will be seen leaving the Bigg Boss 14 house on Monday's (Jan 18) episode. Just like how the housemates are heartbroken, even fans of the star are sad and so they echo #NoEijazNoBB14 on Twitter. 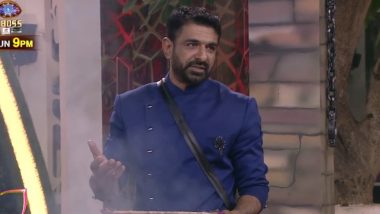 Bigg Boss is a controversial reality show which has always garnered polarised views. While a section of fans loves it, others have slammed it by alleging that the show promotes gross content. Coming back to Bigg Boss 14, it has been churning mixed reviews. Well, now call it a shocking exit of sorts, it is Eijaz Khan who has said goodbye to BB 14. The TV actor made a voluntary exit from the show as he is said to have some prior work commitments. After hearing the news, fans of the star were heartbroken and started trending #NoEijazNoBB14. Bigg Boss 14: Eijaz Khan Out of the Reality Show, Devoleena Bhattacharjee to Replace Him? Deets Inside.

Netizens could not believe that Eijaz is out of the house. Right from sharing some of his best moments from BB 14, asking the channel to bring him back to even saying that they will not watch the show from now on, fans of the Kkavyanjali star seemed literally sad. Here, check out some of the reactions from the trend below. Pista Dhakad, Bigg Boss 14’s Talent Manager, Dies In Accident Post The Show’s Weekend Ka Vaar Shoot.

Evrythng is over nw, @BiggBoss is over for me. Sab khtam. @KhanEijaz I still can't believe ths. 😭😭😭😭😭😭😭 Worst season ever

So he's left the BB house 💔

Sometimes You Have To Get Knocked Down Lower Than You Have Ever Been To Stand Back Up Taller Than You Ever Were.

Some of his well earned bromance inside @BiggBoss house. @KhanEijaz NO EIJAZ NO BB14 pic.twitter.com/7XA6W0U7II

Look at the bright side, guys. Tonight @KhanEijaz will sleep in a bed, have proper food, get to rest, meet his people, get to some privacy and calm. He deserves it after living in that hell house for so many days.

Before Eijaz made an exit from BB, a source close to the show had told Pinkvilla, “Eijaz has had a great run on the show so far. But he will have to leave the house because of work reasons. Since the duration of the show has increased, the schedule is coinciding with Eijaz’s another professional commitment.”

Talking about Eijaz, his journey on the reality show has been phenomenal. The actor from day one played his game and was meant to be among the top five contestants. However, as they say, nothing can be controlled and so all we can say it's always great what happens. Stay tuned!

(The above story first appeared on LatestLY on Jan 17, 2021 11:05 PM IST. For more news and updates on politics, world, sports, entertainment and lifestyle, log on to our website latestly.com).