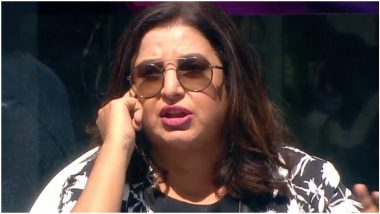 Bigg Boss 14 has launched week 6. Things are getting spicier inside the house. We had three guests in the house, which was refreshing. They brought a storm in the house and so did the new nominations task. The episode had some light moments and some intense moments as well. It was one of the rare light-hearted episodes of BB, with Aly Goni and Jasmin Bhasin pulling Pavitra Punia and Eijaz Khan's leg. Jasmin was also being childish with Aly, which was cute to see. Eijaz has no soft spot for Pavitra, he reiterates while speaking to Jaan Kumar Sanu. Bigg Boss 14 November 9 Episode: Farah Khan Hails Eijaz Khan, Gives A Reality Check To Pavitra Punia, Jasmin Bhasin and Nikki Tamboli - 5 Highlights of BB14.

Charul Malik, Amit Tyagi, Farah Khan are special guests on the show. They are asking all the contestants to reflect on their journey. Farah asks Shardul Pandit to stop talking to the cameras and start interacting with the contestants more. Shardul says that some contestants think that this Splitsvilla, not Bigg Boss. Farah tells him that there is nothing wrong putting forth a love angle and he should also find an angle, be it love, animosity, friendship. Bigg Boss 14 Weekend Ka Vaar November 8 Episode: Salman Khan Calls Out Pavitra Punia and Nikki Tamboli, Naina Singh Gets Eliminated - 5 Highlights of BB14.

BB asks Abhinav to sit on a chair. He does and is informed that he is nominated. He can save himself from nomination if he can convince Aly to destroy Jasmin's favourite doll. Aly does so, as Jasmin cries.

Jaan is asked to sit on the chair next. He can save himself if Nikki destroys her favourite blanket. Nikki agrees in a heartbeat. But she does say that this was her mother's blanket.

To save Kavita, Abhinav has to wash Rubina's doll and gift it to Nikki while admitting that he was wrong.

(The above story first appeared on LatestLY on Nov 10, 2020 11:30 PM IST. For more news and updates on politics, world, sports, entertainment and lifestyle, log on to our website latestly.com).