Bigg Boss 14: Rubina Dilaik Will Not Be Able To Participate in Ticket to Finale Task Because of Rakhi Sawant?

The Tu Tu Main Main between Rakhi Sawant and Rubina Dilaik and Abhinav Shukla seems unstoppable. As in the upcoming episode, Rubina will not entertain Rakhi and throw water on her. However, this will turn out to be a bad stunt for the Shakti actress. Check it out. 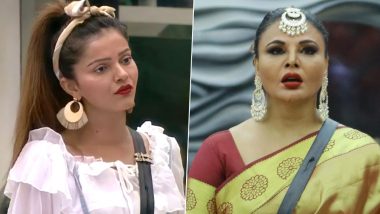 The Tu Tu Main Main between Rakhi Sawant and Rubina Dilaik-Abhinav Shukla seems unstoppable. As after pulling the strings of Abhibav's shorts, the OG item girl of Bollywood will now be seen calling him a 'tharki' (pervert). However, this time Rubina will not take this lightly and in a fit anger will be seen throwing a bucket full of water on Rakhi. And this act of the Shakti actress will turn out to be not in her favour. As Bigg Boss will punish and nominate her. Bigg Boss 14: Devoleena Bhattacharjee Blasts Arshi Khan and Rubina Dilaik, Destroys House Property (Watch Video).

As per The Khabri, Rubina will be nominated for all the upcoming weeks for her water stunt on Rakhi. With this, it also means that the TV star will not be eligible for the ticket to finale task that gives the contestant a direct way to be part of the grand finale. We wonder, how will Rubina's fans react, once this punishment episode will be aired on TV. Bigg Boss 14 Couple Eijaz Khan and Pavitra Punia’s Chemistry in Their First Public Appearance Is Wow (View Pics).

No details on Punishment as of now

Meanwhile, on tonight's (Feb 4) episode, we are going to witness a huge fight between Arshi Khan and Devoleena Bhattacharjee. And as Rubina will take Arshi's side, Devo will also blast at her. High voltage drama awaits. Coming back to Rubi's punishment, do you think Bigg Boss was righteous by doing so? Stay tuned!

(The above story first appeared on LatestLY on Feb 04, 2021 06:55 PM IST. For more news and updates on politics, world, sports, entertainment and lifestyle, log on to our website latestly.com).