Bigg Boss 14 lovebirds Eijaz Khan and Pavitra Punia were recently clicked by the paps in the city twinning in black. This was their first public appearance and we are totally smitten by their chemistry. Have a look! 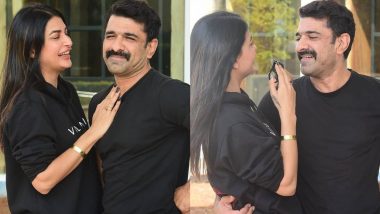 Every year the controversial reality show Bigg Boss 14 gives us a love story to ogle at. This year we saw Eijaz Khan and Pavitra Punia having a love-hate relationship inside the house. But their this andaaz was loved by fans as they started calling them PaviJaz. Soon after, Eijaz's voluntary exit from the reality show, we saw the two making their relationship official during a media interaction. Now, recently the paparazzi clicked the two in the city and this one is their first public appearance. Bigg Boss 14: Pavitra Punia Pens an Emotional Note After Eijaz Khan's Confession About Being Molested as a Kid.

Eijaz and Pavitra smiled and blushed for the lenses. Flashing some electrifying chemistry, the couple were also seen twinning in black. Must say, Eijaz-Pavitra look made for each other and all we would say is god bless the two. For the one's unaware, during the family episode on Bigg Boss 14, it was Pavitra who has come to meet Eijaz and from there on fans expected some sparks. Bigg Boss 14: Eijaz Khan Confesses He Loves Pavitra Punia, Asks Her To Wait For Him (Watch Video).

Even though PaviJaz used to fight and argue with each other on the reality show, they always had each other's back. When Eijaz had opened about his dark secret in a task on the show, it was Punia who supported him from the outside world and even had penned a sentimental message on social media.

Earlier, in interaction with Bollywood Life, when Eijaz was asked about falling in love with Pavitra. He had said, "I never thought this would happen. My friends told me, Eijaz you are dumb, do not fall in love inside the house. My life never works as per plans. She is an amazing person. Pavitra has a beautiful soul. She is so caring. Pavitra is my Annapurna. When she keeps my head on her lap, she feels at home. When she touches me I feel calm." Aww!!!!

(The above story first appeared on LatestLY on Feb 04, 2021 04:03 PM IST. For more news and updates on politics, world, sports, entertainment and lifestyle, log on to our website latestly.com).