Bigg Boss 12 contestant Jasleen Matharu feels Rubina Dilaik is going to win the ongoing 14th season of the reality show. She praised Rakhi Sawant, too, saying Rakhi was playing well and is one of the most entertaining contestants in the current season. 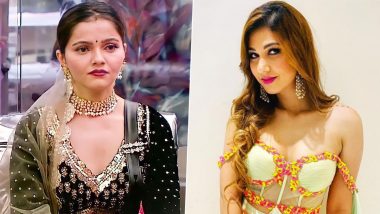 Bigg Boss 12 contestant Jasleen Matharu feels Rubina Dilaik is going to win the ongoing 14th season of the reality show. She praised Rakhi Sawant, too, saying Rakhi was playing well and is one of the most entertaining contestants in the current season. "Honestly, I am not following this season's ‘Bigg Boss'. I thought Eijaz (Khan) will be one of the top five contestants in the show but he suddenly walked out of the show, so it's very difficult to say who is going to be there till the end, but I think Rubina (Dilaik) is going to win the show because she is playing really well," Jasleen told IANS. Bigg Boss 14: Rahul Vaidya, Abhinav Shukla Get Involved in a Massive Fight, Rubina Interferes and Call the Singer ‘Ghatiya Insaan’

Jasleen is impressed by Rakhi's gameplan, too: "Rakhi (Sawant) is very entertaining in the show. She has been entertaining people for many years. She is a sweetheart and I think she is playing really well. Rakhi was a part of the first season and now she has gone back there, so I am sure she must be experiencing a huge difference between then and now. I don't know much about Arshi (Khan), so I would not like to talk about her." Bigg Boss 14: Captain Rakhi Sawant Has Turned Into Rubina Dilaik and Abhinav Shukla’s ‘Chamchi’, Feel Fans

Singer Anup Jalota and Jasleen Matharu rose to fame as a ‘couple' when they entered the reality show two years ago. They entered the show as 'vichitra couple' because of their age gap of 37 years. They had stated on the show that they had been in a relationship for three years, but denied it after coming out of the show, stating it was a marketing tactic.

Would Jasleen like to enter Bigg Boss house again? "Definitely! I always feel that no matter how much money you spend, you are not going to experience that kind of environment anywhere in the world, so I was lucky that I was given an opportunity to be a part of that show. Now, if the makers approach me, I will surely accept their offer," she replied.

Talking about her upcoming film, Woh Meri Student Hai, in which she shares screen space with Anup Jalota, Jasleen said: "The film is in post-production process, so once again you (audience) will be able to see both of us together very soon. Earlier, we have entertained the audience in ‘Bigg Boss' and now we are going to entertain them in this film."

In the film, Jasleen and Jalota play characters inspired by their lives. Jalota plays a singer while Jasleen is his student. "It's a full-on comedy. I am waiting for its release and I am sure audiences are also waiting for its release because I feel that they are going to enjoy the film," Jasleen added. Woh Meri Student Hai has been written, directed and produced by Jasleen's father Kesar Matharu.

(The above story first appeared on LatestLY on Jan 21, 2021 02:27 PM IST. For more news and updates on politics, world, sports, entertainment and lifestyle, log on to our website latestly.com).