Alankrita Shrivastava, whose web series Bombay Begums will soon be streamed, says that making women-oriented films is not easy in Bollywood. The filmmaker who made a mark directing Lipstick Under My Burkha in 2017, adds that this is because women-centric films don't get distribution. 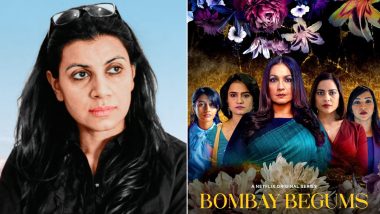 Filmmaker Alankrita Shrivastava, whose web series Bombay Begums will soon be streamed, says that making women-oriented films is not easy in Bollywood. Right from shooting to distribution, it is tough to get the appropriate budgets and provisions. "Budget problems are not specific to me and my films. It is the same story for all female filmmakers. Bombay Begums: Pooja Bhatt, Rahul Bose's Series to Release on Netflix on International Women's Day.

If you want to make films with women who are not big stars, it is a problem. Even with big stars -- Meghna (Gulzar) made Raazi (with Alia Bhatt) -- she had to shoot within limited budget and had to shoot for long hours," Alankrita tells IANS. The filmmaker who made a mark directing Lipstick Under My Burkha in 2017, adds that this is because women-centric films don't get distribution. "The budget is justified through the exhibition and distribution system. These distributors feel that these films cannot make that much money," she says.OTT Releases of the Week: Pooja Bhatt’s Bombay Begums, Eddie Murphy’s Coming 2 America, Monica Dogra's The Married Woman and More.

Alankrita adds that in the Hindi film industry only male heroes and their films are promoted. "We have geared the industry to be a place where only male heroes are propagated. So much money is put into their marketing, and they are given more films. It is almost like making the audience want them. The audience has not been trained to look out for films of women. One hopes that things will change," she says.

Ask her if she ever fears having no audience for her films, and she replies: "I just feel that there are all kinds of audiences for all kinds of films and stories. The great thing about this platform (OTT) is that it has something for everyone. I feel like I should tell what I want to tell. I have to be true to myself. It will not be authentic for me to make films that don't move me or I don't feel for or connect with."

"I will make the films that I believe in and tell the stories that I want to tell. I feel every story has its own kind of audience and you will find it. I feel my work has more audience now than it did 10 years back. I feel audiences are also changing. I don't think that every story has to connect with every person. I cannot watch male superstar films. I can't connect with them. I haven't watched any," Alankrita sums up.

(The above story first appeared on LatestLY on Mar 05, 2021 10:54 AM IST. For more news and updates on politics, world, sports, entertainment and lifestyle, log on to our website latestly.com).