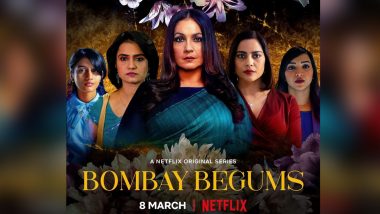 Director Alankrita Shrivastava's Bombay Begums, a series exploring the lives of five modern Indian women in Mumbai, is all set to premiere on Netflix on the International Women's Day on March 8. The series stars Pooja Bhatt, Shahana Goswami Amruta Subhash, Plabita Borthakur and Aadhya Anand along with Rahul Bose, Vivek Gomber and Danish Husain. Shrivastava, best known for her films "Lipstick Under My Burkha" and "Dolly Kitty Aur Vo Chamakate Sitaare", hoped that women in India, and across the world will connect with the story. The White Tiger: Nick Jonas Thinks Priyanka Chopra May Be the ‘First Jonas’ to Win an Oscar For Her Netflix Film

"The series explores the complex journey of working Indian women who are ambitious for power and success, but have many other battles to fight too. It's the story of their daily hustle, the story of their dreams - sometimes buried, sometimes fulfilled," Shrivastav, the series creator and director, said in a statement. The director said she has tried to create a world that reflects the realities of urban working women. Tribhanga Movie Review: Kajol’s Loud Performance Is a Sore Point in Renuka Shahane’s Partly Engaging Netflix Drama (LatestLy Exclusive)

"I hope audiences relate to the characters and find pieces of their own journey reflected in the story. I am excited and proud that Bombay Begums is coming on Netflix on the occasion of International Women's Day." Produced by Endemol Shine India, Endeavor Content, Chernin Entertainment, the story revolves around five women across generations who wrestle with desire, ethics, personal crises and vulnerabilities to own their ambition, in contemporary urban India.