Devoleena Bhattacharjee to Play Grown-Up Bondita In Barrister Babu After the Show Takes A Leap? (Deets Inside) 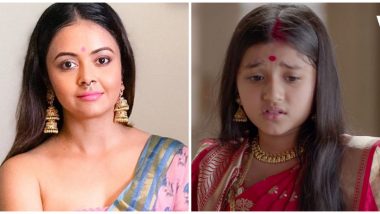 The coronavirus pandemic led to a complete lockdown in the country and with it, the television industry suffered a huge loss as shootings were put on hold. However, on Sunday the Maharashtra government announced good news for the TV fraternity as they were permitted to work with immediate effect but with some strict set of rules. Amid this, we hear that Colors TV's show, Barrister Babu is all set to take a leap. The makers of the daily soap are looking for a new face as the lead. And now as per reports, it's Bigg Boss 13's Devoleena Bhattacharjee who has been approached for the same to play a grown-up Bondita. So this means that Devo will replace the child lead of the daily soap? Devoleena Bhattacharjee Slams Mayur Verma’s Cyber Complaint Against Her, Calls It A 'Publicity Stunt’.

As per a report on SpotBoye, a close source to the show has spilt the beans that the casting call has been made to the actress. The report further adds that 'it is obvious that the makers are looking for someone who has a Bengali touch and a mischievous personality. And Devoleena fits the bill. However, nothing has been finalised yet.' We get the point here as the show is a Bengali family drama, and so who better than Devo.

Also, if you know, the guidelines issued by the government to resume shooting includes that no children will be allowed on the sets which indirectly has made the makers of Barrister Babu take a leap. Talking about the serial, it sees Pravisht Mishra as Anirudh Roy Choudhary and child artist Aura Bhatnagar as Bondita Das in the lead roles. Devoleena Bhattacharjee Faces Cyber Complaint; Mujhse Shaadi Karoge Fame Mayur Verma Accuses Her of Putting His Image Through the Mud (View Tweet).

(The above story first appeared on LatestLY on Jun 02, 2020 04:58 PM IST. For more news and updates on politics, world, sports, entertainment and lifestyle, log on to our website latestly.com).