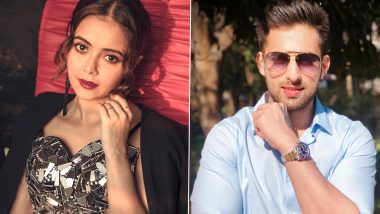 Television actress, Devoleena Bhattacharjee recently made noise for all the wrong reasons. It was Shehnaaz Gill's friend, Mayur Verma from the wedding reality show, Mujhse Shaadi Karoge who filed a cybercrime complaint against the Gopi bahu of Indian TV for tarnishing his image. It all began when Bhattacharjee criticised Shehnaaz and Sidharth Shukla's romance in their music video, Bhula Dunga and also got into a war of words with Mayur over the same. Verma in his lodged complaint against the actress has accused her of defaming him on social media by liking all the posts which troll him. And now Devoleena has reacted to this mayhem. Devoleena Bhattacharjee Faces Cyber Complaint; Mujhse Shaadi Karoge Fame Mayur Verma Accuses Her of Putting His Image Through the Mud (View Tweet).

In an interview with Hindustan Times, the Saath Nibhana Saathiya actress has reacted to the cyber complaint against her and has termed it as a publicity gimmick. She said, "Honestly I don’t know who this Mayur Verma is and why he is using my name everywhere. It could be a publicity stunt. I believe ignorance is the bliss. Neither do I know this person nor about the complaint." Devoleena Bhattacharjee Claims Cyber Cell is Close To Catching The Troll Who Posted Offensive Audio Clip About The Actress and Her Mother (Details Inside).

Devoleena also added how she is unaware of who Mayur Verma is and don't want to get tagged with him. "Honestly, I don’t want to be tagged with (those) who I don’t even know and if my name is doing any good to him or anyone then god bless them," she said. “And Mayur is doing all this to get media attention," she concluded.  Devoleena Bhattacharjee Gets Death Threats From a Fan of Arhaan Khan, Bigg Boss 13 Contestant Urges Mumbai Police and Cyber Cell to Take Action (Read Tweet).

For the unversed, Mayur on May 24, 2020, had shared an image of the complaint on his Twitter and it had all things mentioned in detail. "Devolina has tried to defame me before and today she liked a photo on Twitter which was trying to tarnish my image, she has always been doing this. She first tries to down my own image on Twitter and later supports it," a part of his report read. Well, must say, this online battle is really getting interesting. Stay tuned!

(The above story first appeared on LatestLY on May 25, 2020 04:30 PM IST. For more news and updates on politics, world, sports, entertainment and lifestyle, log on to our website latestly.com).