[EXCLUSIVE] Rupal Patel aka Kokilaben on Her Exit From Saath Nibhaana Saathiya 2: I Had Eight Years Long Journey With All Kinds of Navarasas!

Rupal Patel aka Kokilaben spoke in length about her exit to us and expressed how she feels content playing a strong-headed character on the small screen for eight long years. Check out the full story here. 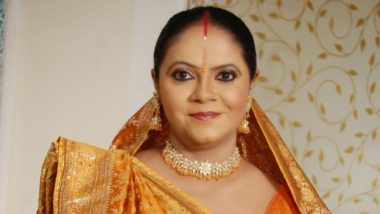 When Television’s iconic serial Saath Nibhaana Saathiya made a comeback with season two, fans of the show were filled with joy. With this, we also saw Kokilaben (Rupal Patel) and Gopi Bahu (Devoleena Bhattacharjee) making their presence felt once again on the daily soap. However, the latest reports of Rupal Patel saying goodbye to SNS 2 came as a shocker to many. With this, we also learned that she was initially signed for a finite period. Now, talking exclusively with LatestLY, Kokilaben aka Rupal Patel spoke in length about her exit and expressed how she feels content playing a strong-headed character on the small screen for eight long years. The Original Kokila, Rupal Patel, Recreates The Viral 'Rasode Mei Kaun Tha' And Makes It Funnier (Watch Video).

“I am very happy and feel contented that I have lived a very righteous, strong and justful character who had eight years long journey with all kinds of Navarasas (emotions). From being a maa, bahu, devrani, saas, I have lived all kinds of variations as Koki. Now Rupal’s journey as Kokila is over and I must take a grateful, respectable and beautiful exit. However as an artist, my journey will continue,” she told us. Saath Nibhana Saathiya 2: Rupal Patel AKA Kokilaben Exits the Show, Says It Was Her Moral Responsibility as an Artist to Say Yes to the Cameo.

Ahead on being quizzed about what’s next, Rupal added that currently she has no other shows in her kitty, and so she might take a break from work. “Right now I do not have any other show in my hand. And it all depends on the flow and I’ll work accordingly. Otherwise, I am a very religious person and so I might visit a religious place as I get peace there.” Kokilaben aka Rupal Patel Confirms Joining the Cast of Saath Nibhaana Saathiya 2.

Well, fans of the iconic character Kokilaben will surely miss her on Saath Nibhaana Saathiya 2. And why not? As there has been never such an influential and opinionated mother-in-law on the small screen before. Lastly, all we wish is luck for Rupal Patel and her career ahead. Stay tuned!

(The above story first appeared on LatestLY on Nov 06, 2020 09:47 PM IST. For more news and updates on politics, world, sports, entertainment and lifestyle, log on to our website latestly.com).