Irrfan Khan No More: Did You Know the Actor Had Played Sant Valmiki in DD Metro’s Mythological Show Jai Hanuman?

Jai Hanuman was a serial that told the stories of Ramayana and Mahabharata through the eyes of its titular Chiranjeevi. Telecast first on DD Metro, the show later moved on to Sony Channel. 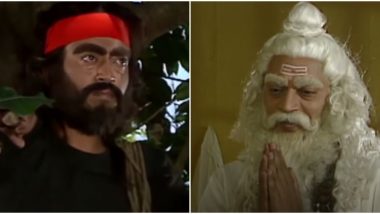 Irrfan Khan's cinematic journey is a saga as fascinating as the kind of movies and shows he has done over the years. Now while we mourn over his untimely demise that happened on April 29, 2020, we look back at how his career has panned over four decades, beginning to peak from the advent of the new century. Irrfan has begun his acting career with roles in both television and movies in the '80s, before being a mainstream presence on television in  the '90s. Thanks to his breakout role in the 2003 film Haasil, Irrfan's movie career got a boost and people began to recognise him as an actor, who is now deemed by many among being one of the finest of his generation. Remembering Irrfan Khan: From Salaam Bombay to Angrezi Medium, Complete List of Actor's Films That You Can Watch on Netflix, Amazon Prime, iTunes and YouTube Online.

But we have talked a lot about his movies. Here, let's talk about his serials. Irrfan Khan had appears in important roles in popular shows like Bharat Ek Khoj, Chanakya, Chandrakanta, Banegi Apni Baat, and Star Bestsellers. But did you know that he had also played an important character in the mythological Hindu show, Jai Hanuman?

Jai Hanuman was a serial that told the stories of Ramayana and Mahabharata through the eyes of its titular Chiranjeevi. Telecast first on DD Metro, the show later moved on to Sony Channel.

In the show, Irrfan Khan was cast as the dreaded dacoit-turned-sage Valmiki, who is said to have penned the story of Ramayana. Irrfan appeared in a couple of episodes, sporting two looks referencing his pre and post divine transformation.

The actor was, however, replaced by Sudhir Dalvi, when the character returned to the show after a long break. By the time, Irrfan's Bollywood career had begun flourishing, which could explain his absence in the show. Irrfan Khan No More: 11 Times When Irrfan’s Scene-Stealing Acts Were the Best Part About Some Perfectly Average (or Worse) Movies.

Jai Hanuman, the show, could be the kind of example you can quote of being the communal harmony that our country once possessed. The serial was directed by Sanjay Khan, a Muslim. Irrfan, of course, was a Muslim, and his character is shown penning Ramayana. The actor who played Lord Rama, Siraj Mustafa Khan, is also a Muslim. Mohammed Aziz had sung the popular title track and the late Khayyam had scored the background music. That was the beauty of our diversity that we are sorely missing these days.

(The above story first appeared on LatestLY on Apr 29, 2020 10:04 PM IST. For more news and updates on politics, world, sports, entertainment and lifestyle, log on to our website latestly.com).