Amit Sadh starrer Jeet Ki Zid is streaming on Zee5 and tells the story of Kargil war hero Major Deependra Singh Sengar. Although it attempts to stay sincere to the a few real life events and the usual clichés of this genre, it's convoluted storytelling mires the experience. 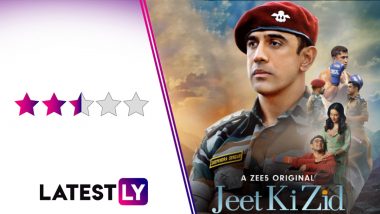 Jeet Ki Zid review: These days critiquing a web show or a movie that has armed forces at the core comes with a set of fear factors. Taking offense is a national sport these days, so it's almost like walking on eggshells when one is reviewing a theme like that. Luckily, Jeet Ki Zid gives you certain opportunities to look beyond the army jawan and at the person who wears that uniform with pride. After all, Indian soldiers are made of flesh and blood too. Amit Sadh Shares He Attempted Suicide Not Once But Four Times

Major Deependra Singh Sengar (Amit Sadh) joins the army to eradicate militancy after his elder brother gets killed during a kidnapping in Kashmir. He is a man who doesn't mind taking calculated risks and often manages to reach the finishing line. But a tragic incident leaves him at the mercy of a wheelchair. The rest of the story is about his struggle to overcome his limitations and becoming the man he wishes to be.

Indian entertainment products are always so soaked in impassioned patriotism that we have become quite immune to how problematic it could be at times. Jeet Ki Zid doesn't attempt to stay away from the tried and tested formula at all. The webseries gets to the sentiment from the first episode itself. The initial episodes go in to establish what a hero Major is despite him having revenge as a motive to join the armed forces rather than feeling of serving the country. Since he is called a ziddi (stubborn) here, there are many scenes that are inserted to justify the same. He decides to go on a mission to bust a hostage situation with his team despite his seniors asking him not to. So that the audience doesn't question the move, at the end of the episode, the real-life Sengar reasons the action. All he got in return was a little scolding from his superior. I have a question here, does stubborness discount your erratic behaviour? He decides to escape from the hospital for his friend's wedding despite doctors advising him to not to. Do check out the explanation at the end of the real life Sengar.

The series jumps through many timelines from 1987 to 1999 to 2000 and you won't be able to make it out if you miss the tickers saying so. Not much attention is paid to making the necessary changes in the setting according to the decade they are in. Also, they seem like standalone years, failing to make a strong connection with the next jump in the timeline. What's funnier is that Amit Sadh doesn't show any visible change in his physical appearence in all the time periods.

The web series is about two wars, one at Kargil and another of the Major's drive to cure himself of his paralytic existence. But the makers got so carried away to show him as a war hero that the inner struggle happens a little too late in the series. By then, you are quite tired of what's happening on the screen to root for him strongly. Will Be Less Active on Social Media for Some Days, Announces Amit Sadh

Watch the trailer of Zid here

Sushant Singh's idea of tough love is torture, that also made me wonder won't such brutal depictiong of armed forces training dissuade people from signing up for 'saving their country.'

Amit Sadh lives and breathes his character. He especially shines at moments where he has to emote his despair and frustration. He tries his best to shoulder the series alone but the obsession to project his agression in nearly every scene gives him little chance to evolve as a character. Amrita Puri as Jaya, Major's dutiful wife, hardly has much to add to the narrative despite being a prop in his personal life in the series. Aly Gony does the cliched happy-go-lucky well-meaning friend act quite well.

-a decent attempt to tell a braveheart's story

-erratic timeline jumps with no work on settings

Jeet Ki Zid seems coonfused about what exactly is the purpose behind the show as it takes its sweet time to get to the personal struggle of Kargil hero. That's where the series actually gets interesting.

(The above story first appeared on LatestLY on Jan 22, 2021 05:47 PM IST. For more news and updates on politics, world, sports, entertainment and lifestyle, log on to our website latestly.com).