Keeping Up With The Kardashians to End After 14 Years: Kim Kardashian Makes this Shocking Announcement

It's been 14 years since the family is shooting for this reality TV show and after as many as 20 seasons, they finally decided to bring down the curtains. 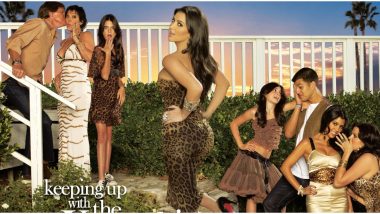 Keeping Up with the Kardashians to end after 14 years (Photo Credits: Instagram)

As disappointing as it may sound but Keeping Up With The Kardashians is bidding adieu to all its fans. Kim Kardashian broke this shocking news to their fans and tried explaining their decision with a heavy heart. It's been 14 years since the family is shooting for this reality TV show and after as many as 20 seasons, they finally decided to bring down the curtains. "We'll forever cherish the wonderful memories and countless people we've met along the way. Thank you to the thousands of individuals and businesses that have been a part of this experience," read a part of Kim's lengthy caption on her Instagram post. Kylie Jenner Wants to Quit 'Keeping up with the Kardashians', Feels She Doesn't Need it Anymore.

Earlier this year, the show witnessed its lowest viewing figures which were well below 900k. The series will return for season 19 on September 17 and will be followed by one last season in 2021. The show chronicled around the Kardashian family, allowing viewers to be a part of their starry affairs. The show witnessed many interesting episodes including Kim Kardashian's marriages to Kris Humphries and West, an armed robbery in Paris, the break-up of Khloe Kardashian's marriage to basketball player Lamar Odom. Kim Kardashian's ‘Keeping Up With The Kardashians’ Beach House in Malibu Up for Auction, Listed for Around $8 Million.

To our amazing fans - It is with heavy hearts that we’ve made the difficult decision as a family to say goodbye to Keeping Up with the Kardashians. After what will be 14 years, 20 seasons, hundreds of episodes and numerous spin-off shows, we are beyond grateful to all of you who’ve watched us for all of these years – through the good times, the bad times, the happiness, the tears, and the many relationships and children. We’ll forever cherish the wonderful memories and countless people we’ve met along the way. Thank you to the thousands of individuals and businesses that have been a part of this experience and, most importantly, a very special thank you to Ryan Seacrest for believing in us, E! for being our partner, and our production team at Bunim/Murray, who’ve spent countless hours documenting our lives. Our last season will air early next year in 2021. Without Keeping Up with The Kardashians, I wouldn’t be where I am today. I am so incredibly grateful to everyone who has watched and supported me and my family these past 14 incredible years. This show made us who we are and I will be forever in debt to everyone who played a role in shaping our careers and changing our lives forever. With Love and Gratitude, Kim

Reacting to Kardashians' decision to end the show, E! in a statement said there was no particular reason that prompted them to arrive at this conclusion and that it respects the family's decision to live their lives without any cameras. While Kourtney was already reluctant to shoot any more episodes and viewing figures falling as well, the family decided to pull the plug before the channel asks them to. A sad but wise decision indeed!

(The above story first appeared on LatestLY on Sep 09, 2020 09:29 AM IST. For more news and updates on politics, world, sports, entertainment and lifestyle, log on to our website latestly.com).