Karan Wahi confirms he was approached and will be a part of Khatron Ke Khiladi Special Edition. Check it out. 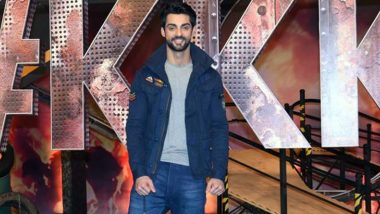 If there is one stunt-based reality show which the Indian audiences love to binge-watch than it's none other than Rohit Shetty hosted Khatron Ke Khiladi Season 10. While fans are still waiting to know who will be crowned as the winner of the latest season, reports of a special edition in the process have already made it to the web. Earlier, it was confirmed that Rashami Desai, Jasmin Bhasin, Haarsh Limbachiyaa and Aly Goni have given their nod for the special edition. And now, here comes a new addition as television cutie Karan Wahi will also be part of the upcoming KKK. Adaa Khan on Her Khatron Ke Khiladi 10 Stint: 'My Family is Surprised as They Always Thought I Am Too Fragile to Handle All This'.

As per TOI, the actor was approached for the show and he has given a green flag to the same. Karan confirmed the news to the portal and said, “I have always maintained that ‘KKK’ was a life-changing experience for me. Right from trying out things I would never do otherwise, to overcoming my fear of dogs, which I suffered from since childhood, it was an enriching, fulfilling and learning experience. It’s not always that a former contestant gets a chance to feature on it, but I got lucky."

"The makers have come up with a special edition, which features contestants from previous seasons. When I was approached for it, I accepted it without batting an eyelid,” he added.

In the same conversation, Karan who was earlier seen in KKK 8 (2017) also expressed how the show pushes you to do beyond your capabilities. “It’s a show that makes you understand your capabilities and push your limits. I feel that you come out of it as a better person, too. So, I hope that this season is as much fun as my previous one,” he said. Khatron Ke Khiladi 10: Did You Know That Yeh Hai Mohabbatein's Karan Patel Owns 12 Horses?

For the unaware, the shooting of the special edition of Khatron Ke Khiladi will commence as soon as the 10th season's winner will be announced. KKK 10 finale is said to be shot in Film City, Mumbai on July 20. Stay tuned!

(The above story first appeared on LatestLY on Jul 12, 2020 02:00 PM IST. For more news and updates on politics, world, sports, entertainment and lifestyle, log on to our website latestly.com).