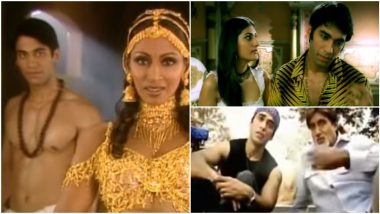 In a sad turn of events, popular movie and television actor Kushal Punjabi had allegedly committed suicide at his Pali Hill residence in Mumbai. He was just 37. As per early reports, the actor who was known for his recent roles in TV shows Ishq Mein Marjawan and Hum Tum, was suffering from depression following separation from his wife. A suicide note was reportedly found at his home, though the contents of the letter have not been disclosed to the public yet. Ishq Mein Marjawan Actor Kushal Punjabi Commits Suicide at His Pali Hill Residence.

Kushal had been a very known face in both Bollywood and television industry. In Bollywood, he had been seen in movies like Kaal, Lakshya, Salaam-e-Ishq, Dhan Dhana Dhan Goal, Sssshhh... and Andaaz. On the small screen, Kushal appeared in shows like Fear Factor, Paisa Bhari Padega and Jhalak Dikhhla Jaa. He was also a well-known fitness icon.

Apart from these, Kushal also made notable appearances in some very popular indie pop videos from the '90s and '2000s. Check out five such videos from the memory lane. Kushal Punjabi Passes Away: Ishq Mein Marjawan, Lakshya, Jhalak Dikhhla Jaa 7 – A Look Back at the Late Actor’s Career.

The 'Oye Bubbly' campaign of the cola company Pepsi was quite popular in the '2000s. The company released a couple of music videos featuring popular Bollywood actors and cricketers. Like this video, that had Kushal as 'Pyaar Ka Pyaasa', featured popular personalities like Amitabh Bachchan, Preity Zinta and cricketers Sachin Tendulkar, Rahul Dravid, Yuvraj Singh, Mohammed Kaif, Zaheer Khan and Irfan Pathan. Amitabh Bachchan who was prominently featured in the video had also crooned the track.

Kushal Punjabi's most popular music video appearance was in the remix track of the Deewar song "Kehdoon Tumhe". Recreated by DJ Aqueel, the song featured Kushal as a waiter who gets launched as a star by a quirky filmmaker and later gets seduced by his own stardom.

Jazzy B's song 'Ik Tera Hasna Marda' featured Kushal as a hapless youngster who gets honeypot-ed by a mysterious lady. The song was quite popular back in the days and was shot in some exotic locales.

Another song where Kushal is upstaged by the girl with whom he had romantic feelings for. This remix of the Jo Jeeta Wohi Sikander song (with beats of Mission: Impossible tune added in) also featured actress Koena Mitra along with him.

(The above story first appeared on LatestLY on Dec 27, 2019 02:58 PM IST. For more news and updates on politics, world, sports, entertainment and lifestyle, log on to our website latestly.com).