ALTBalaji released the trailer of their new web series namely, Mum Bhai. The crime thriller stars Angad Bedi in the lead as the encounter specialist. 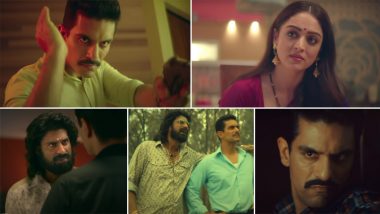 ALTBalaji released the trailer of their new web series namely, Mum Bhai. The crime thriller stars Angad Bedi in the lead as the encounter specialist. In a long trailer the makers emphasized on the plot that basically is a war between police and the gangsters of the maximum city. Angad is seen taking a vow to dive deep into the gangster world and have a 'clean up.'

The trailer also has a lot of action scenes, power packed dialogues. It also has a layer of friendship and sort of a bond between a cop and a don. The narrative shifts from Angad's early days in a hotel as a waiter to growing into a successful cop who is under limelight. Check out the trailer below.

Madhurima Roy, who plays the role of a bar dancer in this series, described the show as, "'Mumbhai' is a crime drama which deep dives into the Mumbai underworld and the narrative revolves around the loyalty and friendship between a cop and an underworld don." Mum Bhai begins streaming on ALTBalaji from November 6.

(The above story first appeared on LatestLY on Oct 19, 2020 04:52 PM IST. For more news and updates on politics, world, sports, entertainment and lifestyle, log on to our website latestly.com).