The ending of the second episode saw Obi-Wan leave Daiyu with a revelation that will haunt him for the next few episodes. The episode itself had some neat amount of action and world building, and it also gave us many tense scenes. 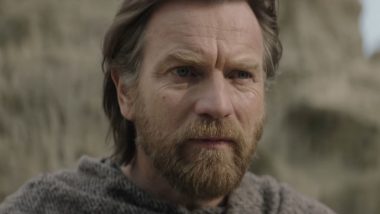 After a long fan campaign, Obi-Wan Kenobi has arrived on Disney+ Hotstar. The first two episodes are currently streaming on the service, and the series follows Obi-Wan Kenobi as he spends his exile on Tatooine, trying maintain a low profile. Taking place 10 years after Revenge of the Sith, Obi-Wan Kenobi also sees the introduction of the Inquisitors in live action. Also, a note, this article will contain spoilers, so come back after you have watched the episode. Obi-Wan Kenobi Review: Ewan McGregor’s Jedi Returns in An Occasionally Slow, But Effective Start to the Star Wars Spinoff Series (LatestLY Exclusive).

The ending of the second episode saw Obi-Wan leave Daiyu with a revelation that will haunt him for the next few episodes. The episode itself had some neat amount of action and world building, and it also gave us many tense scenes. So, with that being said, let’s explore exactly what went down in the second episode of Obi-Wan Kenobi. Obi-Wan Kenobi Actor Ewan McGregor Talks About How He Prepped for His Role.

After Obi-Wan tells Leia to run off and get to the ship, he stays back so he could fend off Reva. Over here, Reva taunts him, as she tells him about Darth Vader. Over here Reva reveals to him that Anakin Skywalker is actually alive, and that he is Darth Vader. Hence, Reva chasing him so she could deliver Kenobi herself to Vader.

They are interrupted by the Grand Inquisitor as Kenobi escapes. Inquisitor gives Reva grief about disobeying his orders, but she stabs him instead so he couldn’t take all the credit of bringing Kenobi in. After their ship leaves, Kenobi is a bit traumatised learning the fact that the man he left to die, is still alive. The episode ends with us getting a look at Vader without his gear in a chamber.

How Does it Set Up Darth Vader?

We all know that Hayden Christensen is coming back to portray Vader. So, it looks like the setup for a meeting between Obi-Wan and Vader has already been laid down. The actors have also teased that a rematch is coming up between them.

With Anakin having rage for Kenobi, we will definitely get to see a fight that will shake the core of Star Wars. With Reva trying her best to get his approval too, it looks like we might see some dynamic between him and her as well.

Is the Grand Inquisitor Actually Dead?

Short answer, no. The Grand Inquisitor isn’t dead. For now, the writers of the show obviously want you to think that he is dead, but that isn’t the case. He is a really huge part of the animated series Star Wars: Rebels, and we can expect him to show up again in the series going forward.

Until then, stream the first two episode of Obi-Wan Kenobi on Disney+ Hotstar as the next episode drops on Wednesday.

(The above story first appeared on LatestLY on May 27, 2022 04:59 PM IST. For more news and updates on politics, world, sports, entertainment and lifestyle, log on to our website latestly.com).