We search for promising content on the OTT platforms every week, so that viewers can chill and binge-watch what they prefer and want. This week we have some awesome releases on OTT, let's quickly take a complete look at the series and movies releasing on the OTT platforms this week. 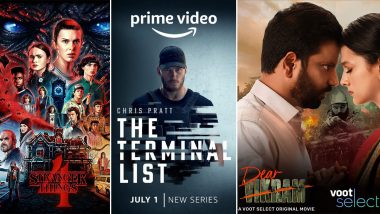 We are moving on to the last week of June 2022 and with that there are several promising series and movies, releasing on OTT platforms like Amazon Prime Video, Netflix, Disney+ Hotstar, MX Player, Voot Select and more. Talking about the biggest release of the week it would be Stranger Things Season 4 Volume 2, which will stream on Netflix from July 1. The finale of the sci-fi horror drama series is going to blow our mind, for sure. The web show stars David Harbour, Finn Wolfhard, Millie Bobby Brown, Gaten Matarazzo, Caleb McLaughlin, Natalia Dyer and Charlie Heaton, among others. Earlier, the Stranger Things Season 4 Volume 1 was released on May 27.  Stranger Things 4 Volume 2 Trailer: Millie Bobby Brown, David Harbour’s Netflix Show Is Ready for an Intense Finale (Watch Video).

(The above story first appeared on LatestLY on Jun 26, 2022 05:06 PM IST. For more news and updates on politics, world, sports, entertainment and lifestyle, log on to our website latestly.com).