Bigg Boss 13 fame Shehnaaz Gill is not just a star, but she's an emotion for her fans. While she did not lift the winner's trophy of the reality show, the singer-actress did make her fans go aww with her cute antics and realness. Recently, she spoke about receiving acid attack threats on social media. Read on. 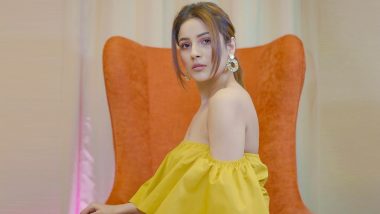 Bigg Boss 13 fame Shehnaaz Gill is not just a star, but she's an emotion for her fans. While she did not lift the winner's trophy of the reality show, the singer-actress did make her fans go aww with her cute antics and realness. Just a mention about her online and the internet gets flooded with numerous messages from her admirers. Having said that, as every coin has two sides, along with love, Shehnaaz also faces a lot of hatred on social media. Recently, in a conversation with Bollywood Hungama, she addressed a few fans questions and also talked about the threats she receives online. Shehnaaz Gill Undergoes Gorgeous Transformation, Says Being Body-Shamed on Bigg Boss 13 Fuelled Her.

When a fan asked whether she is scared by the acid attack threats and morphed videos of her on social media. Shehnaaz had quite a calm answer. “No, I would like to say congratulations to those who are doing such things. Because I have nothing to lose here," she said.

She added, "In fact they are getting people to empathise with me and shower more love on me. I think people do not understand that when you spread negativity about a person, it turns out to be positive for the said person. Because that person gets sympathy. So, it's better not to do such things." Shehnaaz Gill’s Cute and Romantic Photos That Will Turn You Into Her Fan!

On being quizzed by another Shehnaazian on how she deals with trolls, she replied, "When people tell me that there are negative things being said about me, I am like why should I bother. I have positivity as well. It's not necessary to look at that angle. I will just look at the positive angle. Because trollers will do what they have to, they try to put you down. They cannot take in your success. They don't know how much we have struggled. If trollers start to struggle so much, they will stay away from us and start focusing on themselves.” Shehnaaz Gill's 'Tuada Kutta Tommy' Dialogue Is Now a Meme After 'Rasode Mein Kaun Tha' Fame Yashraj Mukhate's LIT Spin to the Viral Video.

Well, we totally agree with every point mentioned by Shehnaaz above. As paying no heed to negativity/trolls is the only solution and that should be the mantra for one and all. Workwise, she was last with rapper Badshah in a song titled Fly and is currently shooting with Diljit Dosanjh for a Punjabi film. Stay tuned!

(The above story first appeared on LatestLY on Mar 06, 2021 01:38 PM IST. For more news and updates on politics, world, sports, entertainment and lifestyle, log on to our website latestly.com).