Dil Bechara, Sushant Singh Rajput's last movie ever has debuted on Disney+ Hotstar on July 24. Starring Sanjana Sanghi as his leading lady, the movie is the Indian adaptation of The Fault In Our Stars. 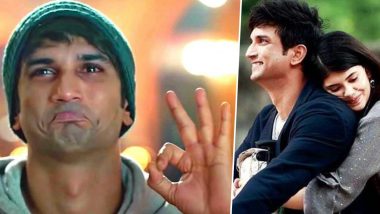 Dil Bechara, Sushant Singh Rajput's last movie ever has debuted on Disney+ Hotstar on July 24. Starring Sanjana Sanghi as his leading lady, the movie is the Indian adaptation of The Fault In Our Stars. Despite fans of the late actor demanding that Sushant's last film be released on the 80-mm screen, Dil Bechara has been dropped on OTT and the actor's fans are going gaga over the late actor's performance in his last film. Dil Bechara: Ankita Lokhande Reminisces Late Sushant Singh Rajput's Journey From Pavitra Rishta To Dil Bechara (View Post).

A Day Dedicated To SSR:

Indeed... Sushant Will Be Dearly Missed:

I am speechless rn 😭❤️ You will be missed SSR ❤️ #SushantSinghRajput #DilBechara #DilBecharaDay pic.twitter.com/fUsOj3oSZP

#DilBechara is a very sweet movie with such a good music tracks, a light smile will remain for the entire movie, but Sushant made us cry again, the movie made us cry again. I literally cannot watch the ending, it seemed as if everything was just planned before.#DilBecharaDay pic.twitter.com/ejYxVaSFCM

An Ode To Sushant... In His Own Words:

Just Watched the #DilBecharaDay and I won't be able to stop my tears while watching #SushantSinghRajpoot he did the absolutely outstanding performances..

When Sushi Said He Wants To Act Like Rajinikanth... Hail Thalaivar:

A Befitting Goodbye To Sushant:

After watching #DilBechara you will fall in love with #SushantSinghRajput 's acting. Then you will realize that #Sushant has gone now and you will not get to see his new movies anymore. You will be disappointed. #hotstar made this #DilBecharaDay #SushantInOurHeartsForever pic.twitter.com/zrKrqi3RH7

Love For Sushant and His Fans All The Way From Tokyo:

I am sure all of you are watching the movie and the reaction is enormous on Twitter. I can feel it in Tokyo. Here the Disney hot star plus does not work but I can feel the emotions of you all. I can feel millions tears 😭 and tweet please

Sushant Singh Rajput was found hanging on June 14 at his Bandra home. The actor had died by suicide and was reportedly suffering from depression for a while now. The actor's family flew into Mumbai from Patna on June 15 and the actor was laid to rest the same day at Vile Parle's Pawan Hans crematorium. His ashes were immersed in the river Ganga on June 16 by his father and three sisters. Rest in peace Sushant Singh Rajput. Your legacy will continue to live with us and you will be missed every single day.

(The above story first appeared on LatestLY on Jul 24, 2020 10:28 PM IST. For more news and updates on politics, world, sports, entertainment and lifestyle, log on to our website latestly.com).