Sushant Singh Rajput's Last Movie Dil Bechara To Premiere On Star Plus On August 9, 2020 After Digital Release on Disney+ Hotstar (Deets Inside) 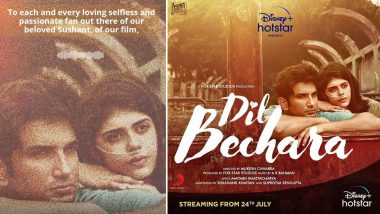 Actor Sushant Singh Rajput's last film, Dil Bechara, the Hindi remake of The Fault In Our Stars, gave him a befitting goodbye on July 24, after the actor took his own like on June 14. Sushi's last film went on to break and create many records, despite getting a digital release on Disney+ Hotstar. And while the film has already released, Star Plus will also be having a premiere of Dil Bechara. Dil Bechara Movie Review: Sushant Singh Rajput's Final Film Is Entertaining Yet Soothing Balm for Aching Hearts.

As per reports in India Forums, Star Plus will be the channel on which Dil Bechara will have its Television premiere on August 9, 2020. And while the portal does not mention any on-air time and there are no promos yet, we assume the movie will premiere on any prime time slot obviously. Sushant Singh Rajput's Last Movie Dil Bechara Drops On Disney+ Hotstar, Fans Trend #DilBecharaDay And Bid A Tearful Farewell To SSR (View Tweets).

No thanks to the COVID-19 pandemic and subsequent lockdown, a lot of Bollywood films have gone the digital route, like Gunjan Saxena; The Kargil Girl, Sadak 2, Laxxmi Bomb, Bhuj: The Pride of India and Coolie No:1 among others. While Sushant's fans demanded that Dil Bechara be released in theatres as it was the actor's last film to be released. But the movie ended up releasing online.

(The above story first appeared on LatestLY on Aug 02, 2020 11:47 AM IST. For more news and updates on politics, world, sports, entertainment and lifestyle, log on to our website latestly.com).