Dil Bechara has been perfectly crafted to make you cry. The tragedy associated with the film will be a dagger to your heart. It ends on an imperfect note, but life is also about imperfections, after all. An entertaining, engrossing, and beautiful film. Sushant's cuteness, liveliness, and infectious energy will deliver a few hours of happiness. 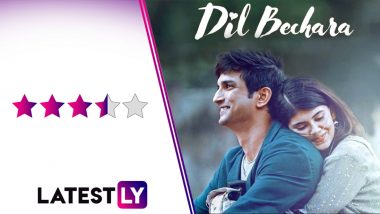 Dil Bechara Movie Review: Dil Bechara begins with Kizie Basu (Sanjana Sanghi) dissing Bollywood. And it sets the tone of the film right away. The first fifteen minutes are wonderfully edited - introduction to the heroine's life doesn't overstay its welcome. With sharp edits, we are fully aware of her sad, lonely, cancer-struck world as quickly as possible. And then enters, the life of this film about death, Sushant Singh Rajput, literally dancing and prancing. He is Immanuel Rajkumar Junior aka Manny. He is the breath of fresh air that the heroine's dying lungs need. Sushant Singh Rajput's Last Movie Dil Bechara Drops On Disney+ Hotstar, Fans Trend #DilBecharaDay And Bid A Tearful Farewell To SSR.

Sushant lights up the screen, every frame that he is in. His effervescence is infectious. You feel a burst of energy. Just like how happy Geet from Jab We Met made you feel. Annoyed by the weirdness, but oddly attracted to it. Sushant is a brilliant actor, who once again surrenders to the camera. He plays this too-cool-for-school character with just as much perfection as he played Sonchiriya's Lakhan. Sanjana Sanghi lives up to her part, exuding innocence and charm.

A strict diktat has been issued against critics by controversial author Chetan Bhagat to not act 'over-smart', so I am a little scared but... for the most part, the movie remains a light-hearted story and doesn't delve deep into the illness. It is a love story that moves forward unaffected by their health, which might be a cause of concern. It almost feels like a romanticisation of disease, that is until the final few moments. Sushant lets go of any iota of vanity as he breaks down in a heartbreaking scene.

The movie struggles with tonality, not committing to the grief and tragedy as it does to the happy moments. The editing and the screenplay let down the movie in the final scene. The voiceover narration and what is unfolding on the screen doesn't blend perfectly. It will be a spoiler, if I say too much.

As I said, this movie dares to hate Bollywood. Our hero is a fan of Rajinikanth. The heroine is a fan of an independent musician, whose creations are "not filmy". She forgets the name of "David Dhawan ka beta". Together with a friend, they harbour a dream to make a Bhojpuri movie. "Aao Filmon Ke, Beadab Gaane Gaate Hain", they sing on the streets of Paris. But, still, there are enough references to Bollywood sprinkled all over. The mother is called 'Angry Young Woman'. The heroine's breathing apparatus is compared with sunlight for Jadoo from Koi Mil Gaya. Yes, these comical moments are ample in this melancholic film. Despite the hate for Bollywood, Dil Bechara is quite a Bollywood film.

Mukesh Chhabra's direction is fresh. He tells the story energetically and swiftly, with beautiful cinematography and melodious music. The movie cares about vanity, but thankfully, not enough to have cancer struck heroine dress in a sexy LBD for her prom. Alas, a few hiccups stop me from calling this a perfect movie.

- A rather offbeat approach to establish characters, not spoon-feeding the audience

- The editing is off at a few points

Dil Bechara has been perfectly crafted to make you cry. The tragedy associated with the film will be a dagger to your heart. It ends on an imperfect note, but life is also about imperfections, after all. An entertaining, engrossing, and beautiful film that you can watch with your family. Sushant's cuteness, liveliness, and infectious energy will deliver a few hours of happiness.

(The above story first appeared on LatestLY on Jul 24, 2020 10:54 PM IST. For more news and updates on politics, world, sports, entertainment and lifestyle, log on to our website latestly.com).