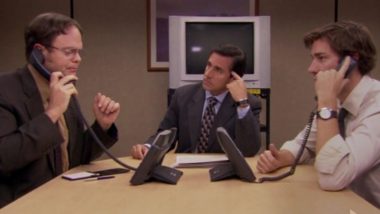 The world is trying its best to contain the COVID-19 outbreak. Of course, in some time from now, we will have a few movies and TV shows inspired by these testing times. Here is one that sounds promising already. While there is still no confirmation about the reboot of the hit series, The Office, the producers of the show are set to bring something else that's equally exciting. Ben Silverman and Paul Lieberstein are developing a series inspired by the comically horrifying tales of Zoom conference calls.

As the majority of the global workspace has shifted to homes due to the outbreak of the contagious disease, employees are staying connected to each other via the virtual medium. Video conference calls on Zoom have emerged as a new fad. We have seen many viral videos emerge from such Zoom meetings. One poor woman forgot to shut her camera and proceeded to take a leak in the bathroom, with her colleagues watching on the screen. The Office producers were inspired by this new reality of virtual connectivity at the workspace for their upcoming show.

As per reports, the description of the show is: "A wunderkind boss who, in an effort to ensure his staff’s connectedness and productivity, asks them all to virtually interact and work face-to-face all day.”

“So many of us are jumping on daily Zoom meetings — for work and beyond,” Silverman said in a statement, as per Deadline. “We are in a new normal and are personally navigating ways to remain connected and productive at work and in our home lives.”

"With the brilliant Paul Lieberstein at the helm, we think we have a series that not only brings humor and comfort during this troubling time but will also be an inventive and enduring workplace comedy for years to come," he added.

No other details about the upcoming show were revealed. It is yet unknown if the untitled show will be set during the COVID-19 pandemic or not. The cast is to be finalised.

(The above story first appeared on LatestLY on Apr 08, 2020 12:03 PM IST. For more news and updates on politics, world, sports, entertainment and lifestyle, log on to our website latestly.com).