Woman accidentally turned on potato filter while on a work video call. Here are other such funny stories and videos of work video conferencing fails have been shared online. 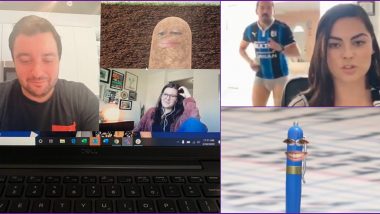 What would you do, if you are in a video conference call with your boss and then he/she is looking like an actual potato? We bet you would not stop laughing. That's exactly what has happened to a Twitter user, whose boss accidentally turned into a potato with some filter during their meeting on Zoom. And not being able to revert that, she attended the entire meeting in the same filter. When a picture from this meeting was shared online, it went crazy viral raking over 8.5 lakh likes! Soon the lady got dubbed as 'potato boss' online and to respond to it, the boss even joined Twitter! Her reply to her video call fail is also winning the internet. The quarantining and social distancing due to Coronavirus pandemic has forced people everywhere to work from home. Funny stories and videos of work video conferencing fails have been shared online. 'Work From Home' Funny Memes and Jokes Trend Online as Employees Show the Hilarious Side of WFH Amid Coronavirus Outbreak.

For those who have been working from home from in the past few weeks may be used to team meetings on a conference or video calls. But as people across the world are still learning to use these video conferencing tools, there are numerous instances when it has miserably failed. Twitter user Rach Clegg chronicled her boss Lizet Ocampo's moment when she accidentally turned to look like a potato because of some filter. She attended the entire meeting in the same manner. Picture still from this meeting is going viral on the internet and Clegg did not have to worry about her Ocampo firing her. She instead joined on Twitter to give a reply to that viral picture.

Here's The Picture of Boss Turning Into Potato Filter During Video Call:

my boss turned herself into a potato on our Microsoft teams meeting and can’t figure out how to turn the setting off, so she was just stuck like this the entire meeting pic.twitter.com/uHLgJUOsXk

This tweet is going crazy viral with some of them wanting to know how to use that feature! Even Microsoft took notice of this tweet and commented, "TOO FUNNY." Soon Clegg made another tweet to welcome her boss, who had just joined on Twitter after the pic went viral.

I yam potato boss. You should see me in a crown, right @billieeilish? I yam glad this is making folks laugh at this time. Please stay planted at home and safe! For more needed laughs, follow my favorite comedian @cristela9 . Potate out. #HASHtag #PotatoBoss https://t.co/OxpidZc921

We love her spirit! She took it in stride and gave the audience some silly potato puns. This incident reminds us of another such picture that went viral, when a journalist from NY Times was trying out some 'add-on' features on Zoom, ended up looking like a pen just before a serious business meeting. She shared the picture on Twitter and netizens wanted her to carry on with her meeting in the same way!

omg HELP i was messing around with some zoom add-on and now i have to do a serious business interview and am stuck like... this pic.twitter.com/sakL6m4o9k

A few days ago, a video went viral which showed a woman's boyfriend scantily clad in the background while she was on a conference call. The video was too funny when the guy wearing just his underpants and sweatshirt appeared in the middle and the girl tried to move him out of his frame.

Hahahaha working from home has its drawbacks. 🤣🤣

While these are funny instances, a few days ago, a woman named Jennifer accidentally used the washroom while she was on the video call. She realised it too late and the video was leaked online. However, netizens stood up in her support and called out her colleagues for posting the video online. These are some of the recent incidences that have been shared online in the past few days. Well, these instances spread the good laughs amidst the grim situation of the pandemic everywhere.

(The above story first appeared on LatestLY on Apr 01, 2020 04:15 PM IST. For more news and updates on politics, world, sports, entertainment and lifestyle, log on to our website latestly.com).