A woman named Jennifer who was on a video conference call with her colleagues accidentally took her phone in the bathroom. She forgot to put the camera off and continued with her business, meanwhile, others were still on the call. By the time she realised, it was too late and the damage had been done. 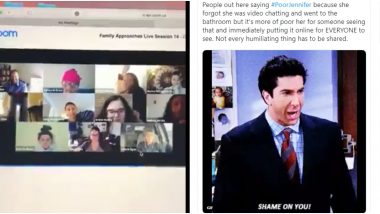 These days almost everyone is functioning from home as the Coronavirus pandemic has imposed a lockdown in most regions. People are adapting to working from home and it can get a little tedious for those who aren't used to it. A woman named Jennifer who was on a video conference call with her colleagues accidentally took her phone in the bathroom. She forgot to put the camera off and continued with her business, meanwhile, others were still on the call. By the time she realised, it was too late and the damage had been done. Her colleagues could not help but feel a little uncomfortable and some were left laughing. The video was uploaded on social media and quickly went viral. While Jennifer may be embarrassed on what happened, the internet came in her support. #PoorJennifer has started trending on Twitter, where people are offering comforting messages to her and saying she should be proud that she made people laugh in these tough times. Old Video of Texas Mayor Caught Farting on Tape After He Forgot to Switch Off Mic is Going Viral, Netizens Wonder if He Washed His Hands.

The clip of their video conference call has about 10 colleagues connected. Jennifer forgot to switch off the camera when she used the washroom. At the end of it, one of the colleagues is heard saying, "Omg Jennifer, what happened?" While another male member says, "I saw nothing." The embarrassing moment was taped and probably shared online by one of the co-workers. Soon as the video went viral, many people showed in support of Jennifer. #PoorJennifer is trending on Twitter with people slamming with the colleagues for not reminding her but instead having fun with it. Some even asked her to either sue the coworker who leaked it or quit the company. From Mia Khalifa to Osama Bin Laden, Viral Video of Students' Online Attendance Amid Digital Classes Due to Coronavirus is Making Netizens Laugh Out Loud.

Check Tweets in Support of This Woman:

#PoorJennifer is all of us right now. Trying to cope with all this madness, adjusting to working from home, multitasking to the best of our abilities, and figuring out who our real friends are (shame whoever recorded and posted that, they need to be fired!) pic.twitter.com/GPBMTql7uD

Hey Jen, Great job multitasking. Most working moms have done this before and not ashamed to admit it. Pls quit the company you work for. One or more of your coworkers is asshole. Then sue the crap out of them. #PoorJennifer #IStandWithJennifer

People out here saying #PoorJennifer because she forgot she was video chatting and went to the bathroom but it's more of poor her for someone seeing that and immediately putting it online for EVERYONE to see. Not every humiliating thing has to be shared. pic.twitter.com/CiyTySbWO7

I refuse to pity #PoorJennifer. Jenn is a hero. We are a country—nay a world!—desperate for just a little harmless comedic relief and Jenn stepped up—like a smutty Lucille Ball! Take a bow. Pick up your award and tell the haters, “Hey, shit happens!” 🤷‍♀️ pic.twitter.com/VyWxqNzrs4

#PoorJennifer I'd quit. No joke.

Not because she should be embarrassed--- Because you obviously have some shady ass coworkers.

Every single coworker in that video SUCKS not just the person that posted it. They are all weird for not telling her they could see her. #PoorJennifer works with trash pic.twitter.com/ybF3D7S7TZ

Clearly, Jennifer has a lot more supporters than those who would laugh or make her feel embarrassed about it. As one of them even commented on how she should be proud and take ownership that she managed to make at least a few people smile in these dark times.

(The above story first appeared on LatestLY on Mar 23, 2020 11:30 AM IST. For more news and updates on politics, world, sports, entertainment and lifestyle, log on to our website latestly.com).