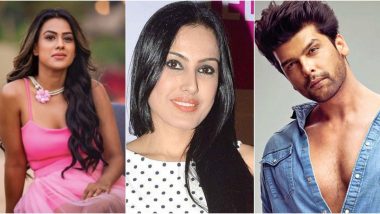 In the light of the recent India-China face-off in Ladakh, Government of India has now announced a ban on 59 Chinese apps which also includes one of the most popular apps used in India, TikTok. It has been common not only for regular people but also celebrities who have created funny video content on the app. We have already seen how the likes of David Warne, Shilpa Shetty Kundra and other famous personalities have built a huge fan base on TikTok where dance and acting videos are common. With a ban announced on the app, a few TV celebs were first ones to react. TikTok, UC Browser Among 59 Chinese Apps Banned by Govt of India Amid Row With China, See Full List.

Actress Nia Sharma who is known for being a leading lady on Naagin 4 took to Twitter to laud the government move as she wrote, “Thank youu for saving our country. This Virus named Tik tok should never be allowed again!” Among other actors who also took to social media to react to the same were Kamya Punjabi and Kushal Tandon. Bollywood celebs are yet to react to this move and we wonder how those who have been busy making TikTok videos amid quarantine will have to say about this. Here's a look at how TV celebs have reacted to the ban. #TikTokBaninIndia Funny Memes and Jokes Trend on Twitter As Netizens Laud Govt's Move to Ban The Chinese App Among 59 Others.

With the news of TikTok ban coming in, meme creators from India are having a field day as they took over social media to create some hilarious content about how TikTok celebrities will be reacting to this big shock.

(The above story first appeared on LatestLY on Jun 29, 2020 11:50 PM IST. For more news and updates on politics, world, sports, entertainment and lifestyle, log on to our website latestly.com).